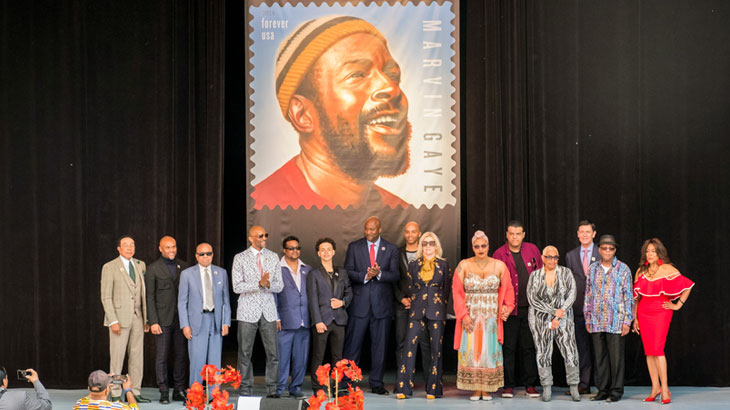 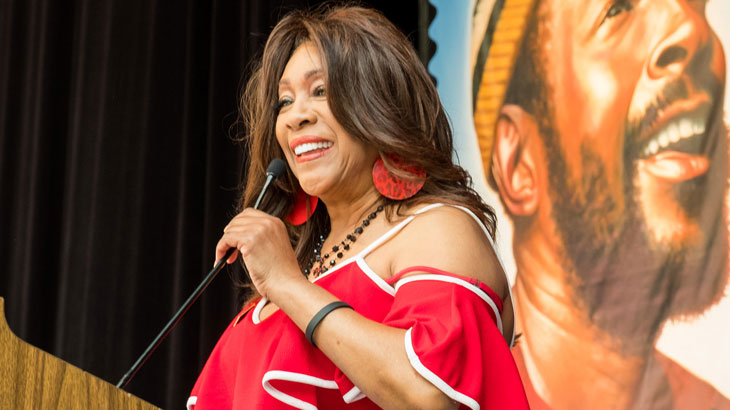 Mary Wilson, member of the Supremes, served as the master of ceremonies for the Marvin Gaye stamp event. USPS photograph. 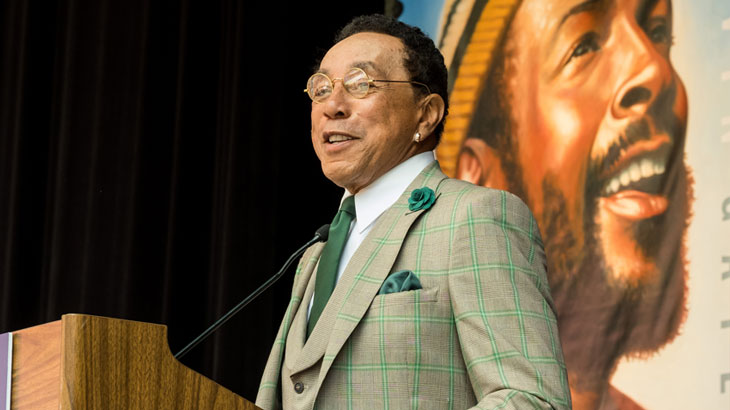 An enthusiastic audience – including a who’s who of Motown recording dignitaries – helped celebrate the release of the Marvin Gaye stamp April 2 in a first-day ceremony at the Greek Theatre in Los Angeles.

The U.S. commemorative forever stamp was issued on what would have been Gaye’s 80th birthday. Gaye (1939-1984) started his musical career at Motown Records, where he went from session singer to popular and critical success on the pop and R&B charts, earning the nickname the Prince of Soul.

Gaye’s many hits include I Hear It Through the Grapevine, What’s Going On, Mercy Mercy Me, Let’s Get it On and Sexual Healing.

The ceremony was a celebration of the new stamp and Gaye’s talents, with many of the singer’s music colleagues, family, friends and admirers on hand.

“People are beginning to realize the true genius of Marvin Gaye,” said guest speaker Berry Gordy, founder of Motown Records. “A Marvin Gaye comes around only once, period. … We miss his mind, we miss his creativity, we miss his humor, but most of all, we miss his love.”

Others taking part in the ceremony included singer Mary Wilson, an original member of The Supremes, who served as ceremony emcee and Gary R. Barksdale, chief postal inspector, U.S. Postal Service, the ceremony’s dedicating official. Among those joining them onstage were singer-songwriter Smokey Robinson, stamp artist Kadir Nelson and members of the Gaye family — son Marvin Gaye III, daughter Nona Gaye, sister Zeola Gaye and brother Antwaun Gay. Kenny Lattimore, a classical, jazz and gospel singer, performed a couple of tunes, including a lively rendition of Gaye’s 1964 hit, How Sweet It Is (To Be Loved by You).

Robinson, who started his singing career in the 1950s and worked with Gaye during the early days of Motown, then based in Detroit, said that he would be hard-pressed to name his favorite song of all time.

“I have many, many favorite songs,” Robinson told the audience at the Greek Theatre. “But my favorite album of all time is What’s Going On. The album is more poignant today than when [Marvin Gaye] wrote it. He prophesized on that album.”

The 1971 album, Gaye’s 11th, includes the title single, which was ranked No. 4 on Rolling Stone's list of the “500 Greatest Songs of All Time.” The critically acclaimed concept album speaks to some of society’s ills, including pollution, drugs and poverty.

Gaye’s brother, Antwaun Gaye, spoke to the gathering about the meanings of many of the album’s songs and reminded folks of the important lyrics. “When he sang Mercy, Mercy Me, he was saying that we should be better stewards of the Earth.” On What’s Going On, he sang ‘We don't need to escalate
you see, war is not the answer, for only love can conquer hate.”

The ceremony began with an appearance by the singer himself. During the presentation of the colors by a military color guard, a large screen showed a video of Gaye performing his ground-breaking soulful rendition of the Star-Spangled Banner during the 1983 NBA All-Star Game at The Forum in Inglewood, Calif.

“You could feel the vibe as soon as he walked out there,” NBA All-Star Reggie Theus said. “He was the epitome of cool, and smooth at the same time.” Theus was among those quoted in a 2018 story by Justin Tinsley on the ESPN SportsCenter website that explores Gaye’s performance (https://theundefeated.com/features/marvin-gaye-the-star-spangled-banner-1983-nba-all-star-game-players-anthem).

At the April 2 ceremony, several speakers thanked the U.S. Postal Service for issuing the stamp.

“It is a little surreal. I’m a little overwhelmed by it all but overjoyed at the same time,” said Jan Gaye, the singer’s widow, according to an online story from Lee Bailey’s Electronic Urban Report (Eurweb). “It’s an amazing honor. I mean, everybody doesn’t get this.”

“Gaye was a man whose timeless music was a true catalog of human emotions that inspired, informed and entertained the world,” Barksdale told the appreciative crowd.

The forever stamp is the ninth in the Musical Icons series, which started in 2013 with the Lydia Mendoza stamp (Scott 4786). The Marvin Gaye stamp was issued at the current first-class domestic rate of 55¢ but will forever pay the cost of a first-class domestic letter. Each 16-stamp pane is designed to look as if a vinyl 45 rpm record is popping out of a sleeve. The reverse side has a large image of the performer and looks like a record album.