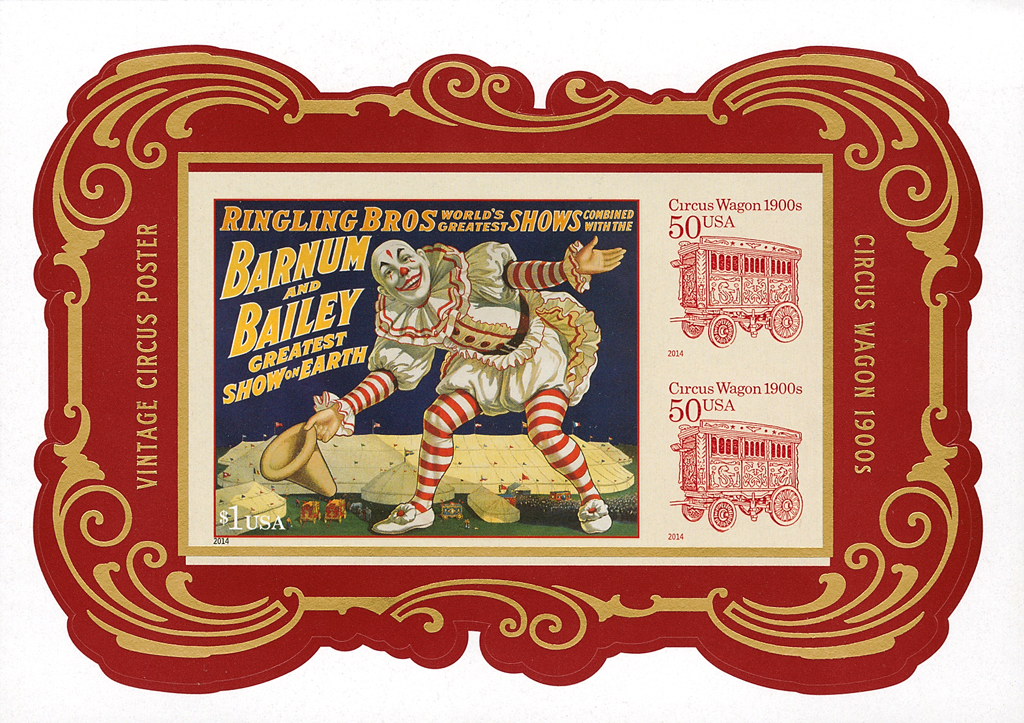 All the proper colors are present, but on this Circus sheet example from a press sheet of 12, the gold framing and text is shifted up about 1.5 millimeters. The shift is most noticeable above the stamps. 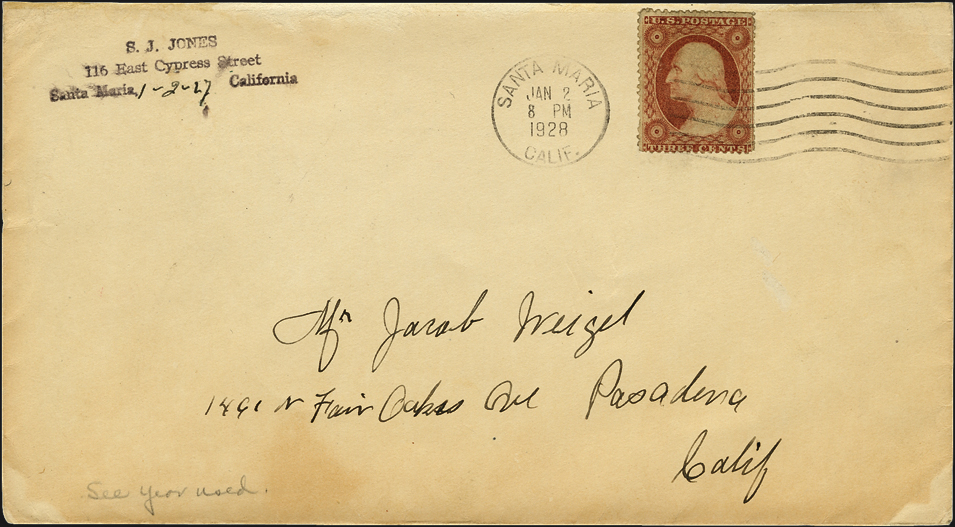 The United States’ first-issue stamps of 1847 were declared invalid as of July 1, 1851, when the 1851 stamps were released. And the 1851 stamp designs, both the original imperforate and 1857 perforated versions, later were demonitized.

When the Civil War of 1861-65 started, there were substantial stocks of U.S. stamps in post offices throughout the Confederacy. Most of these were 1857 perforated issues.

In order to prevent the Confederate states from turning these stamps at post offices into cash, these issues were demonitized nationwide and replaced with the issue of August 1861.

There was a period designated for exchanging the old stamps in private hands as the new 1861 issues were received at U.S. government post offices.

These examples were followed by covers bearing both issues that were marked “Old Stamps/Not Recognized.” In these cases, new stamps had to be added to replace the old.

Sixty-seven years later, the cover shown nearby was mailed from Santa Maria, Calif., to Pasadena, using a demonitized stamp.

Did a spouse pick up and use a handy stamp that was part of a collection?

In 1928, the proper first-class rate for 1 ounce was only 2¢, so the envelope technically should have been marked postage due for that amount.

Another late, but this time perfectly legal, use is the 1893 8¢ Columbian used in 1937 on a cover postmarked at La Grange, Texas.

Despite the red and blue airmail chevrons around the outside of the cover, which would seem to indicate that it was sent by airmail, the envelope appears to be a hand back, or possibly for local post office box delivery at the LaGrange post office. The airmail rate at the time was 6¢.

That is not the only reason the choice of stamp is odd. Nearly 45 years after it was issued, a mint 8¢ Columbian was worth much more than a used one, and more than the postage it paid.

The National Industrial Recovery Act (NRA) label is also curious. By this time, the act was itself obsolete; it was declared unconstitutional by the Supreme Court two years earlier, in 1935.

Linn’s reader Grant Berry Jr. from Hughesville, Pa., has reported a neat variety that he found on the 2014 $2 Circus three-stamp souvenir sheet in one of the press sheets that he purchased.

Berry’s press sheet (with 12 individual souvenir sheets) has a color misregistration between the hot-stamped gold foil ornamentation and text, and the three stamps within the red border.

This misregistration is most easily seen above the stamps, where the gold box is shifted up about 1.5 millimeters.

While not nearly as significant as the missing gold error reported in the April 27 issue of Linn’s, page 10, any variety on this issue is unusual and desirable.

I am again offering an example of the automatic teller machine receipt showing the U.S. Flag and Chalkboard stamp.

Steve Schumann was able to obtain a roll of these receipts and was kind enough to send it to me, knowing that many Linn’s readers would like to have an example for their collection to go along with the actual 1999 33¢ Flag and Chalkboard ATM stamp (Scott 3283).

There is no cost, other than sending an addressed envelope franked with 49¢ in postage to John Hotchner, c/o Linn’s Editor, Box 4129, Sidney, OH 45365. However, it may be a few weeks before the receipts are sent out.