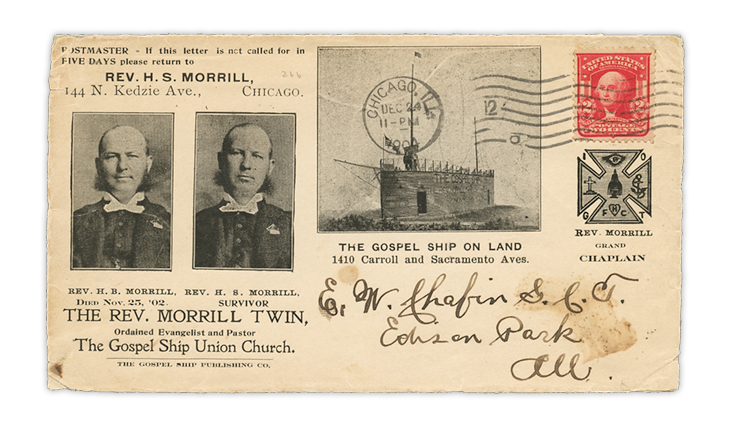 A 1904 cover preserves a bit of long-forgotten Chicago history: the ministry of the Morrill twins and their “Gospel ship on land.”

The unusual 1904 cover shown here highlights the fact that stamp and cover collectors are conservators of history.

This cover is an example of illustrated mail, a term used to describe first-day covers, advertising covers and other covers decorated with commemorative or explanatory art. Illustrated mail can serve as an interesting reflection of the time in which it was created.

The cover is franked with the 1903 2¢ Washington Shield postage stamp, canceled Dec. 24, 1904, in Chicago, Ill. Pictured on the left side of the cover are the Rev. Horace and Rev. Herbert Morrill, twins who were both ordained Baptist ministers. They constructed their Chicago church in the form of what looks like a stranded, landlocked ship.

This church is shown in the center of the cover with a two-line caption below it that reads, “The Gospel Ship On Land” and “1410 Carroll and Sacramento Aves.”

This church held upward of 1,000 people and was intended primarily as a refuge for sailors and those in poverty.

When Horace, who is identified with the initials “H.B.” on the cover, passed away in 1902, a Chicago newspaper said under the headline “Picturesque Preachers” that “the most remarkable religious co-partnership of modern times came to an end. …”

The article described the twins’ waterfront mission work in New York City and in Liverpool and other English seaports, and then said: “Returning to this country, they decided that the sailor of the great lakes was getting less attention as to his moral and religious welfare than his salt water brother, and that the vicinity of Chicago, where hundreds of lakesmen are laid off part of the winter offered the best field for their endeavors.”

The article continued: “The twins called themselves evangelists. Others have called them crusaders, missionaries, and by other names less polite and with a different meaning. That they were different from the ordinary run of evangelists they never disputed.

“They rather gloried in the fact. It was to their peculiarity that they owed a great deal of their success, for their meetings were entertainments of a rare kind.”

The other twin, Herbert, identified as “H.S.” on the cover, continued with the work after the death of his twin. He married in 1906 and passed away in 1927. The brothers are buried together in Forest Home Cemetery in Chicago.

This cover brings to the modern era a bit of Chicago’s past that might otherwise be consigned to the dustbin of history. To me that is reason enough for its preservation.