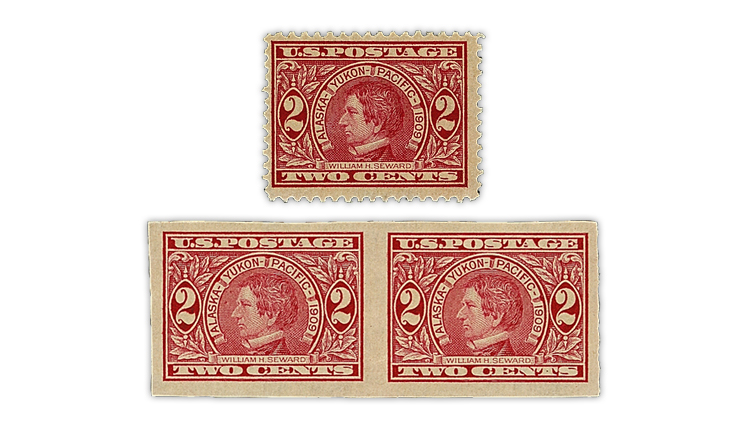 Two versions of the Alaska-Yukon-Pacific Exposition stamp were issued in 1909: a perforated sheet stamp and an imperf stamp. A Scott-listed imperf error exists in which a plate number that produced only stamps issued perforated was found with imperf stamps.

A United States 2¢ carmine stamp showing William H. Seward was issued June 1, 1909, to promote the Alaska-Yukon-Pacific Exposition that opened that date in Seattle, Wash. The stamp was issued perforated (Scott 370) and imperforate (371), as shown here.

The Scott Specialized Catalogue of United States Stamps and Covers has an intriguing entry for the 2¢ perforated stamp. The listing is Scott 370a, described as “Imperf, (error) P#5209 block of 6.”

How could there be an imperf error when there were imperforate stamps issued?

The Scott U.S. Specialized catalog explains in this note: “No. 370a comes from error panes found in perforated stock. Plate 5209 was used only to print the perforated Alaska-Yukon-Pacific Exposition issue. Number 370a can only be collected as a plate-number stamp or multiple. Without an attached plate number 5209 the stamps from this pane cannot be differentiated from No. 371.”

The Scott valuation for the imperf error (Scott 370a) is $2,250 mint. The value is in italics, which indicates an item that can be difficult to value accurately. The error is not known used.

How many of these errors were found is not specified, but the aforementioned Scott note says “panes,” which means at least two panes with two plate blocks per pane.

So far as I know, only one left side number has been reported. Do the others still exist?