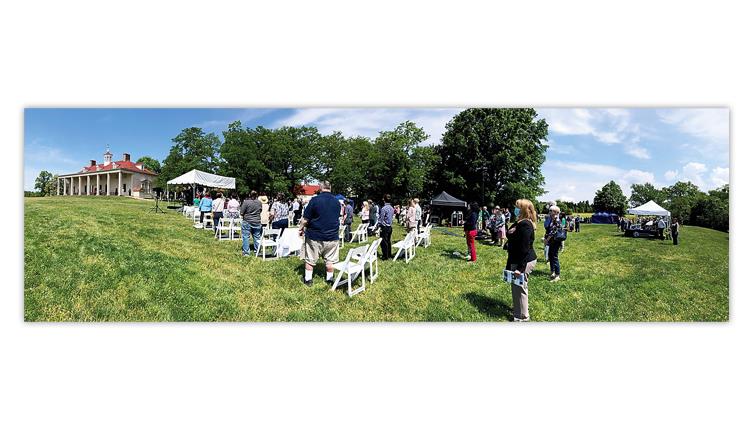 The Heritage Breeds commemorative forever stamps were dedicated May 17 at George Washington’s Mount Vernon in Virginia. The ceremony took place on the lawn next to the mansion. Photograph by Jay Bigalke. 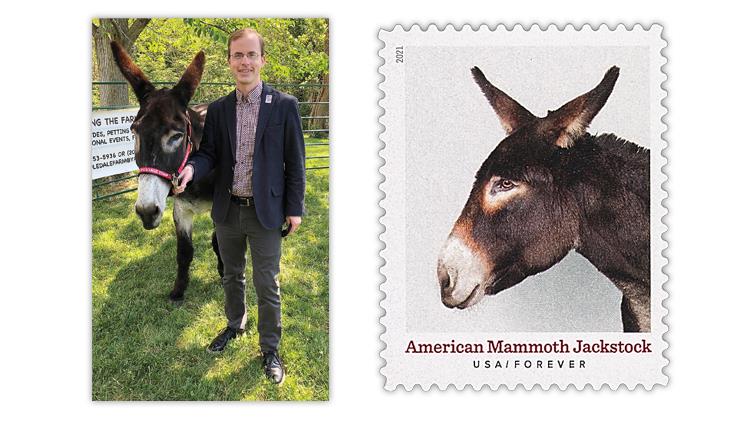 Linn’s editor-in-chief Jay Bigalke stands next to Sharpy, the American mammoth jackstock donkey, who was the model for the postage stamp. Sharpy wore a custom-designed bridle that reads “I’m on a postage stamp.” 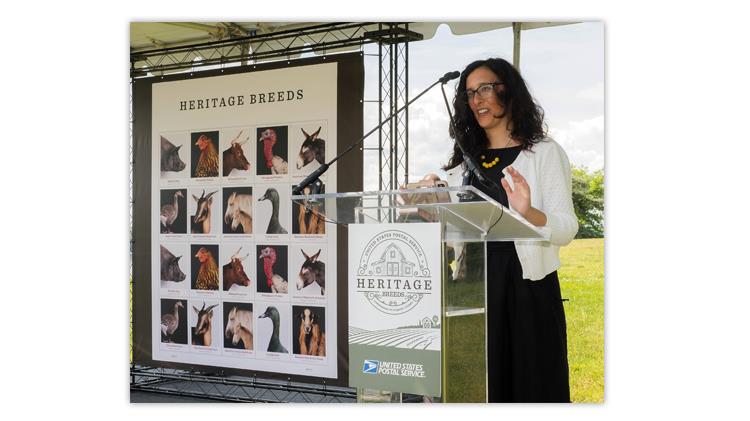 Heritage breeds photographer Aliza Eliazarov, who took the pictures of the 10 animals shown on the stamps, spoke during the ceremony about her experiences with each of the stamp subjects. Photograph by Daniel Afzal, U.S. Postal Service.
Previous
Next

Public in-person first-day-of-issue ceremonies have returned for the United States Postal Service after a year’s hiatus because of the COVID-19 pandemic.

And collectors, postal employees and others were eager to get back to it as evidenced by the crowd of approximately 250 that showed up May 17 at Mount Vernon, Va., for the issuance of the 10 Heritage Breeds commemorative forever stamps.

The event took place on the grounds of George Washington’s home. Just steps from the house was a tent with a stage, chairs placed in groups of two spaced out for social distancing, another tent for stamp sales and cancellations, and an event area where all 10 breeds of the animals shown on the stamps were present thanks to the support of Livestock Conservancy.

The panoramic photo below shows the mansion, the audience and the animal area (at far left).

For me, there were plenty of highlights to the day. Of note, one of the animals photographed for the stamps was present at the event.

Sharpy, the American mammoth jackstock donkey, was brought to the ceremony by his owners from Tripledale Farm in Guilford, Conn. It was a long trip for them, but you could tell they were proud of the honor. They created a customized bridle for Sharpy to wear that says “I’m on a postage stamp.” They even allowed people to stand next to him to get pictures taken, and I didn’t pass up on that opportunity.

Many families that were touring Mount Vernon that day attended the event and enjoyed seeing the animals, too.

General Washington, as portrayed by historical actor Dan Shippey, posed for photos and also spoke at the ceremony.

Additionally, heritage breeds photographer Aliza Eliazarov delighted the crowd with brief stories of how she took the pictures that were used to design the stamps. She even described the experience she had with each animal during the photo shoots.

It was a pleasant day for an outdoor event, and I look forward to the next opportunity to attend one of these celebrations of American history.