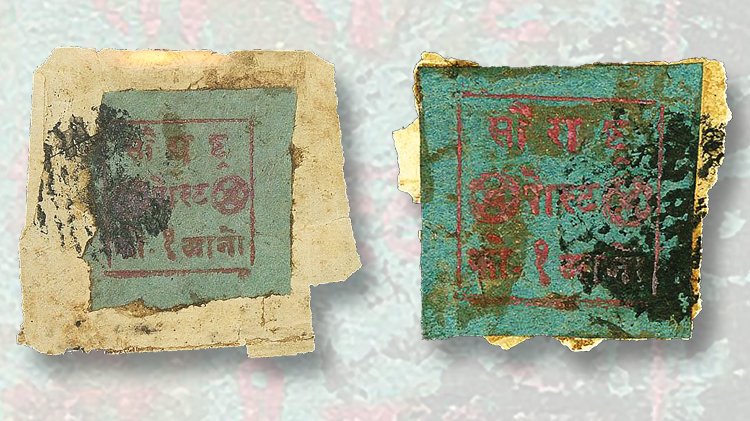 These two stamps from Soruth, another India feudatory state, also realized strong prices during the Cherrystone sale of the Belville collection. The 1868 1-anna red on green paper, left, came in at $10,925, while its companion on blue paper, said to be th 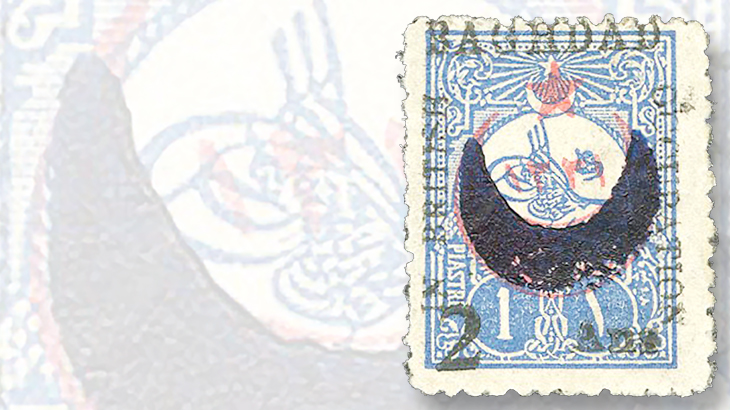 A plethora of overprints eventually led to this stamp from Mesopotamia: a 2-anna overprint on a Turkish 1-piaster semipostal that itself already bore a couple of overprints. It sold for $8,050 to an eager bidder at the Cherrystone sale. 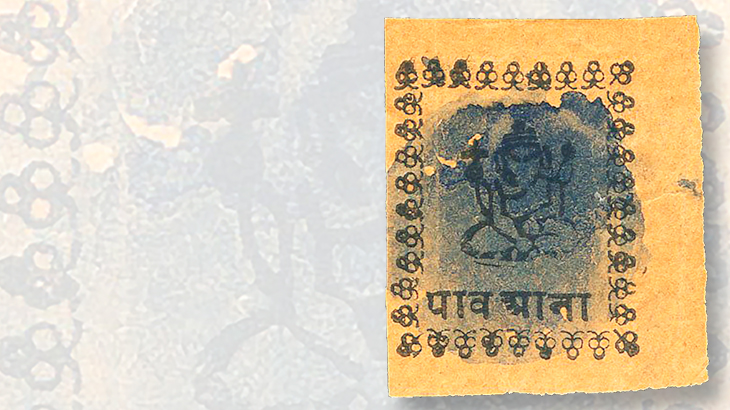 During its July 26-27 sale in New York City, Cherrystone Auctions offered the Beville collection of worldwide stamps. Among the gems in that holding was this 1893 ½-anna stamp in black on orange paper from the India feudatory state of Duttia, which sold f
Previous
Next

Some months ago, one of the respected philatelic society journals ran a light-hearted piece on the “world’s funkiest stamps.”

Tipped by the author as some of the grubbiest and ugliest creations in the history of philately, it was an amusingly perverse kind of top-10 list.

It was also far from complete.

During the last 175-plus years, stamps have been produced by many methods. Those made by fine engraving or top-of-the-line color offset lithography have been glorious to behold.

Others, whether because of duress, poverty, or carelessness, have turned out somewhat less than glorious.

In times of need, typewriters, rubber stamps, upcycled ephemera — anything that can produce a recognizable impression — have been pressed into service making stamps.

We philatelists collect it all, so long as it has served a legitimate postal function, even when it doesn’t exactly make our album pages shine.

And if it’s rare, lack of beauty is no hurdle to a high price. Just look at British Guiana’s famous 1856 1¢ Magenta, a stamp no one has ever called beautiful, which sold at auction in June 2014 for $9.4 million.

Some of the funkiest stamps came from India’s so-called feudatory or princely states, a group of more than 30 autonomous territories within British India that ran their own postal systems and until the 1940s produced their own stamps for local use.

British collectors have sometimes referred to these as “the Uglies,” though it’s unclear when or where this term originated.

Due to their crude production, many of the scarcer varieties have been forged, and authentication by a knowledgeable authority is important.

Some of the rarest (and perhaps ugliest) India Feudatory States stamps were offered by Cherrystone Auctions in New York July 26-27, as part of the Beville collection of worldwide stamps.

This sale represented the breakup of a worldwide collection of some 86,600 different stamps, assembled by one collector who basically opened the Scott catalog and worked all the way through, from the United States to Aden to Zululand.

According to Cherrystone, the collection had a “focus not on the glamorous and so-called iconic, but rather on the unsung and often undervalued rarities from the various Imperial Colonies and far reaches of the globe.”

Sure enough, midway through the alphabet, things began to get funky.

Datia (traditionally spelled Duttia) was a small state of 2,130 square miles near Gwalior in central India. Founded in 1626, today it is part of the state of Madhya Pradesh. From 1893 to about 1920, it issued its own stamps.

The earliest of these consisted of a typeset design with the elephant-headed god Ganesha and a short inscription in Devanagari script, surrounded by a frame of trefoil leaves.

A ½-anna stamp in black on orange paper (Scott 1), with a blue handstamped control mark blotting out much of the design, was described as unused without gum as issued, and “by far the finest” of the four known examples. The stamp had a certificate of authenticity from the recognized British expert Peter Holcombe.

There is admittedly a certain beauty to its funkiness. It sold for $13,800, including the 15 percent buyer’s commission added by Cherrystone to all lots.

Soruth was another of India’s stamp-issuing states, a peninsular region on the northwest coast. The country name appears as “Saurashtra” on stamps beginning in the 1920s, and today it is part of the state of Gujarat.

While its later issues are beautifully designed and printed, Soruth’s earliest stamps, from the 1860s, were somewhat less refined.

A simple typeset design, with three lines of text and a couple of dingbats within a single-line frame, is printed in greasy red ink on greenish paper for the 1-anna stamp of 1868 (Scott 4). Lacking perforations, the stamp is roughly torn from its neighbors (the sender, apparently, lacked access to a pair of scissors) and affixed with glue to a grubby fragment of paper, tied by a smudge of black ink.

Said to be the finest of the six known examples, all of which are used, the stamp was certified by the U.S.-based Indian States Expertizing Service (ISES). It sold for $10,925.

A companion stamp, of the same design on blue paper (Scott 5), was the next lot in the sale, likewise accompanied by a recent ISES certificate. More cleanly cut and said to be the finest of just three known, it sold for $14,375.

At the end of World War I, when the Middle East was in turmoil, Britain, France, and other allied powers took over various parts of the collapsing Ottoman Empire. Britain was given a mandate over the area today called Iraq.

At first, Turkish pictorial stamps were overprinted with the words “Baghdad/In British Occupation” and a new denomination in Indian currency.