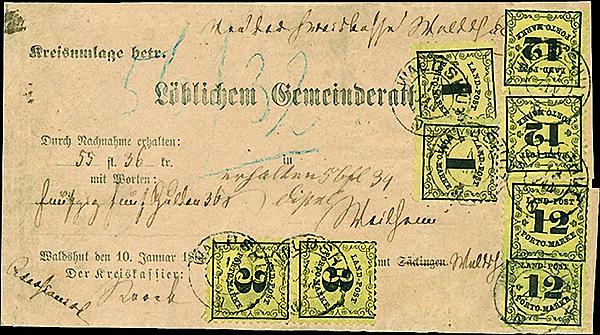 India’s 1854 4-anna blue and red Queen Victoria stamp with the queen’s head inverted. This cut-to-shape postally used example will be offered at auction by Christoph Gaertner during the firm’s five-day series of sales Oct. 6-10.

The Christoph Gaertner auction firm in Germany is hosting five days of auctions Oct. 6-10 at its Bietingheim-Bissingen premises.

The sale covers the world, with particular strength in stamps and postal history of Asia, Germany, United States, Europe, Australia and British Colonies, and thematics.

Included in the broad range of worldwide material is a postally used cut-to-shape example of India’s 1854 4-anna blue and red Queen Victoria stamp with the queen’s blue head inverted — upside down in relation to the pale red frame (Scott 6c). The stamp is struck with the diamond of dots postmark.

The stamp is described by Gaertner as having cut-to-full margins, a thin at upper left, a short closed tear at foot, otherwise fine. The stamp is accompanied by a 2012 authentication certificate from Sismondo in New York and a 2002 certificate from BPA Expertising in London.

The sale also includes the 5¢ carmine Nashville Confederate postmaster’s provisional stamp as a vertical tete-beche pair (Scott 61X2a) on an 1861 cover, one of two such known. The cover is accompanied by a 2013 Philatelic Foundation certificate and offered with a listed value of E28,000 (roughly $36,050).

The extensive range of philatelic material in the Gaertner series of auctions is described in several volumes of bound catalogs. The lots also can be viewed and bids can be placed at the Gaertner website, www.auktionen-gaertner.de.