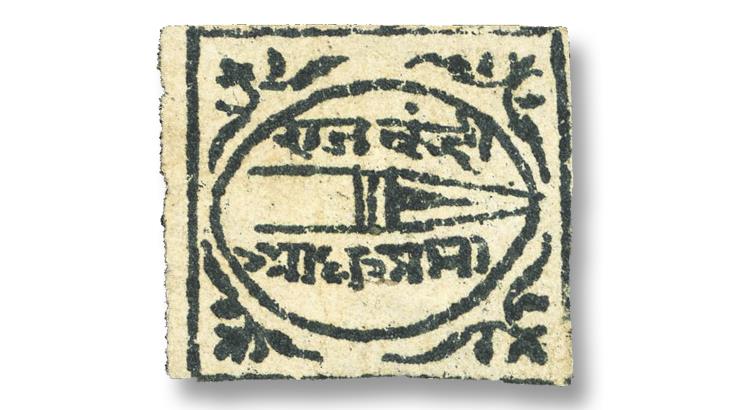 Among the highlights of David Feldman’s Dec. 5-9 autumn auction series is this unused imperforate 1894 ½-anna slate gray stamp on laid paper from the Dan Walker collection of the Indian feudatory state of Bundi. 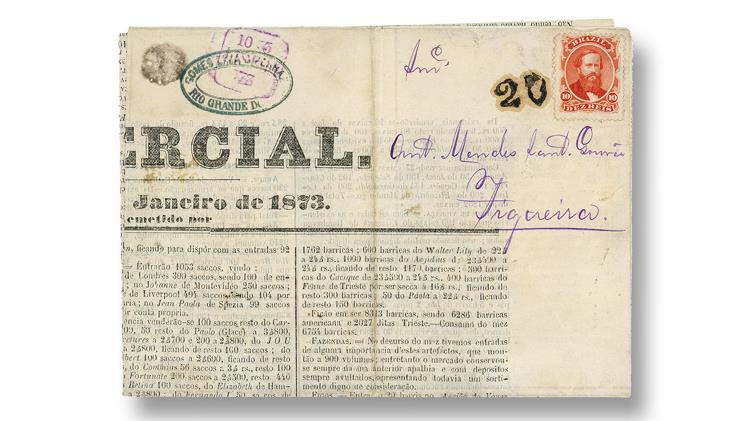 Feldman’s Dec. 6 auction of the Bicentenario collection of the Dom Pedro issues of Brazil includes this 1873 copy of the O Commercial newspaper franked with a 10-reis vermilion Emperor Dom Pedro stamp paying the correct printed-matter rate. 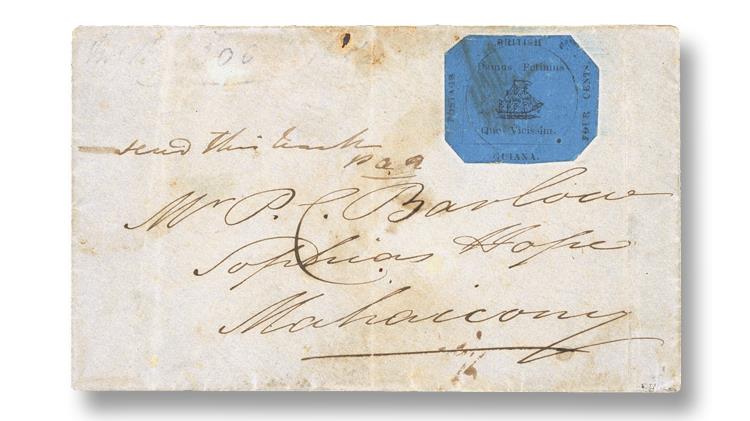 On Dec. 9, Feldman will offer a standout rarity from British Guiana. The Hope cover is the only one known franked with the 1856 4¢ black stamp printed on blue paper colored through.
Previous
Next

David Feldman will offer an impressive array of desirable worldwide stamps and postal history during its autumn auction series to be held Dec. 5-9 at the firm’s gallery in Geneva, Switzerland.

The series begins with 212 lots from the Dan Walker collection of the Indian feudatory state of Bundi and part 7 of the J. Chalhoub collection of Egypt, consisting of 277 lots.

According to Feldman, the Bundi sale “shows strength in the Daggar Issues and especially the later Sacred Cows, with many useful single items plus some important and valuable collections.”

More than 800 lots of Europe and overseas material and part 1 of the Bicentenario collection of the Dom Pedro issues of Brazil will be up for bids Dec. 6.

“A great part of the [Bicentenario collection] has been gathered during decades and many lots will be offered for the first time at auction,” Feldman said.

“After the earlier issues displaying numerals, the ‘Dom Pedros’ were the first stamps of Brazil to show the portrait of the Emperor.

“The beautiful execution of the … engravings, combined with the refulgent colours used in the printing, make these stamps rank among the finest and most attractive issues in that period worldwide.”

The Dec. 7 sessions will feature almost 500 lots of France and colonies, the Art of Sperati collection, and large lots and collections.

Sperati “without doubt created, with his own hands, the greatest ever collection of world classic stamp forgeries ever seen,” Feldman said.

“To many in the philatelic world he is the ultimate stamp imitator, to others his creations are revered as the most dangerous of all adhesive reproductions.”

Crossing the auction block during three sessions on Dec. 8 is the Hausman collection of Europe and overseas, Latin America, and Great Britain and the British Empire.

On the final day of the series, Dec. 9, an additional 578 lots of Great Britain and British Empire will be available to tempt bidders.

Bidders, regardless of budget, are sure to find something of interest for their collections.

Leading off the offerings from the Walker collection of Bundi is a lovely unused example of the imperforate 1894 ½-anna slate gray stamp on laid paper (Scott 1). The central design, or vignette, pictures an Indian dagger known as a katar.

Feldman notes that the stamp has close to very large margins, four intact framelines and a “sharp crisp impression for this extremely rare stamp.” Accompanying the stamp is an expertizing certificate from the British Philatelic Association issued in 2022.

In unused, very fine condition, Bundi Scott 1 is valued at $19,000 in the Scott Classic Specialized Catalogue of Stamps and Covers 1840-1940.

One of the more eye-catching items from the Bicentenario collection of the Dom Pedro issues of Brazil is an 1866 10-real vermilion Emperor Dom Pedro stamp (Scott 53) used to pay the correct printed-matter rate on a copy of the O Commercial newspaper mailed Jan. 31, 1873, from Rio Grande do Sul in Brazil to Figueira, Portugal.

The handstamp to the left of the uncanceled stamp is a “ ‘20’ tax marking to be paid by the addressee and corresponding to the first rate with carriage of subsidized packets,” according to Feldman.

Feldman provides a detailed note explaining the significance of this printed-matter item:

“Most of the newspapers in existence sent to Portugal were the ‘Revista Commercial da Praca da Bahia’, but these have not text on their reverse side and consequently this does not enable them to be folded towards the interior. In that manner those newspapers externally display the side without text, where the franking was applied, and therefore do not clearly show to be newspapers. This lot, distinctly exhibiting the usage of a newspaper per transatlantic mail, is extremely rare thus.”

A great rarity from British Guiana, known as the Hope cover, is among the highlights of the Dec. 9 sale of Great Britain and the British Empire.

The Hope cover is the only one known franked with the 1856 4¢ black stamp printed on blue paper colored through (Scott 16). The cover’s moniker comes from the addressee, Sophia’s Hope Estate in Mahaicony, British Guiana.

The stamp was cut octagonally before being affixed to the envelope and bears the handwritten “EDW” initials of postal clerk Edmond D. Wight. A handstamp on the back (not shown) indicates the cover transited through Demerara.

Feldman describes the unique cover as “one of the outstanding covers of British Guiana” and “a great exhibition and world rarity.”

The Hope cover once graced the collection of William Augustus Townsend (1904-93), which Harmer’s sold in October 1970. It last appeared at auction during Feldman’s June 2014 sale of the John E. du Pont grand prix collection of British Guiana.

A British Philatelic Association expertizing certificate issued May 10, 2014, states that the cover is genuine.

In used condition off cover, the stamp is valued at $225,000 in the Scott Classic Specialized catalog. The value is italicized to indicate an item that seldom appears in the philatelic marketplace.

Seven separate catalogs have been prepared for the Dec. 5-9 autumn auction series and are available for viewing and download on the Feldman website. To access the catalogs, click on “Auctions” on the home page and select “Upcoming Auctions” from the drop-down menu.