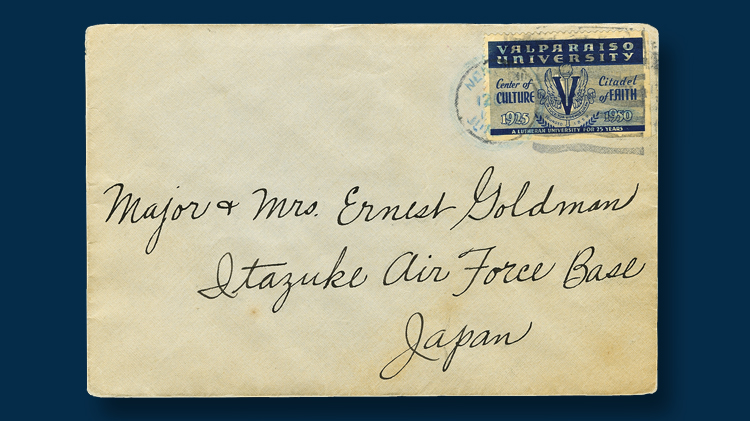 How did this cover bearing only a label from Valparaiso University reach the addressee at Itazuke Air Force Base in Japan?

A cover bearing a Valparaiso University label is shown with this column. It is addressed to Major and Mrs. Ernest Goldman at the Itazuke Air Force Base in Japan. The university is located in northwestern Indiana. I first pictured this cover in the U.S. Stamp Notes column in the July 4, 2016, issue of Linn’s.

The stamplike label has no value stated. Instead it is inscribed, starting at the top of the design, “Valparaiso University,” “Center of Culture,” “Citadel of Faith,” the years 1923 and 1950, and “A Lutheran University for 25 Years.”

The cancellation on this cinderella is unreadable, but clearly not postal.

In the aforementioned 2016 column, I offered a theory that Valparaiso University had established some sort of distance learning outpost for the United States military in Japan, and that this piece of correspondence would have been included with others in a mailed packet or that is was hand delivered by a university staff member traveling to Japan. I invited Linn’s readers to propose their own theories.

The most credible response was from the university itself, specifically from Rebecca Ostoyich, archives assistant for Archives and Special Collections:

“Your article … has been brought to our attention. We have done some research on this stamp in our archives. It was created in 1950 for Valparaiso University’s 25th anniversary as a Lutheran institution. There was a letter created to send out with the stamps from President O.P. Kretzmann on stationery that matches the stamps. It is a general letter, addressed simply to, ‘Dear Friend’, explaining that the purpose of the stamp ‘is to publicize the University everywhere as a center of Lutheran culture and a citadel of Christian faith.’ ”

Ostoyich quoted the 1950 letter as saying, “You can help to spread the name of Valparaiso across the land — by placing one of these Stamps on the back of the envelope whenever you mail a letter. With other friends of the University doing the same thing, the Silver Anniversary will be widely advertised.”

“We do not have record of who this letter was sent to,” Ostoyich said, “but given the nature of the letter it was probably sent far and wide to alumni, friends, donors, and potential donors.

“How this particular stamp made it to Itazuke Air Force Base, we are not positive. In 1949, President Kretzmann was part of a U.S. government mission that sent four clergymen to Japan and Guam to run retreats for military chaplains. Although this happened before the creation of the stamp, it does place someone from Valpo [Valparaiso] in Japan around the time of the stamp. One theory could be that Kretzmann met this Major Goldman during that trip, although it does not appear that this particular air force base was on his 1949 itinerary.

“Your theory of a distance learning outpost established by the university does not seem to be the case, as we can find no evidence of such a program. Since it seems that these stamps were sent to a large population, there could be any number of ways that the stamp would end up at an air force base in Japan.”

Later, Ostoyich came up with additional information from an unpublished manuscript titled History of the O.P. Kretzmann Administration, 1940-1958 by George W.E. Nickelsburg Jr.

Nickelsburg, writing about the university’s public relations efforts in this period, said: “Much of the public relations business is knowing the right gimmicks to use. Knopp [Herbert W. Knopp, director of public relations] knew the why and wherefore of such methods. One interesting example took place in 1950. The university was celebrating the 25th anniversary of the LUA [Lutheran University Association], and this presented the perfect opportunity for such a gimmick …

“An issue of 40 million stamps commemorating the anniversary was printed and distributed to strategic places. A New York exporting firm requested stamps to place on all its outgoing mail, which covered 39 foreign countries. A Chicago manufacturer also requested a supply, and a county recorder in Texas asked for enough stamps to use on one month’s mailing from his office.”

With 40 million of these labels sent out, I would not be surprised to see additional examples that have made their way into philatelic collections.

My thanks to Ostoyich for her diligence in tracking down the information.