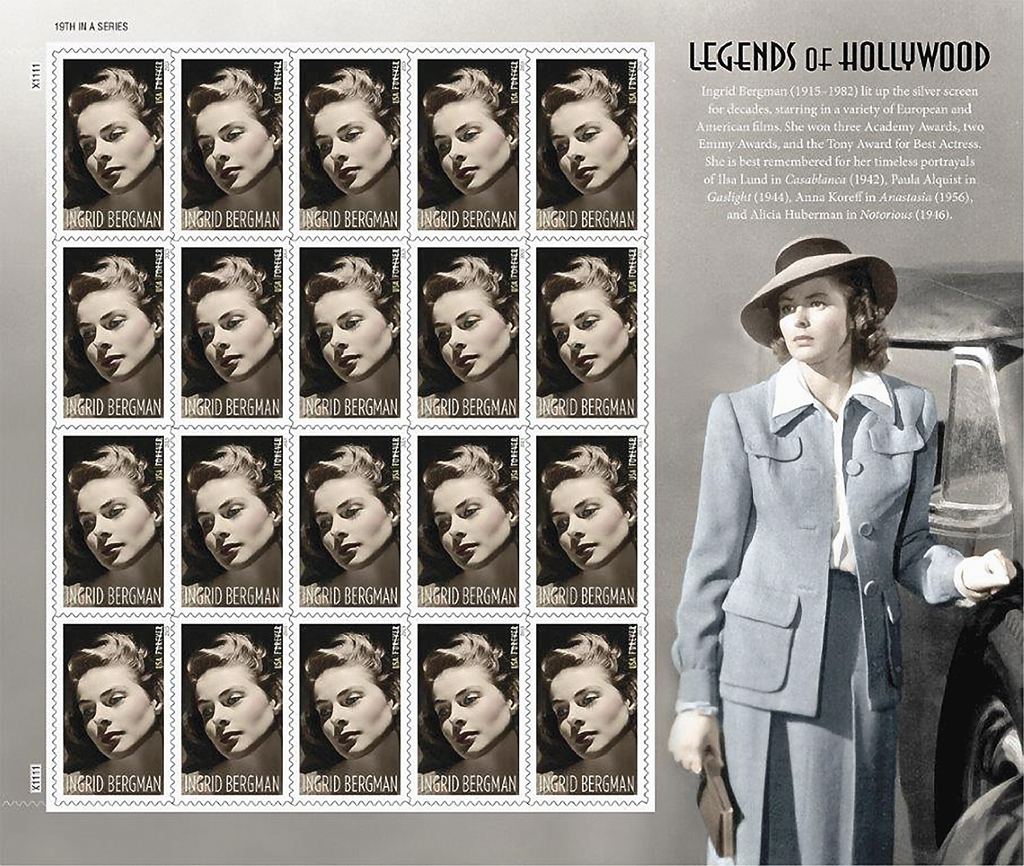 The Legends of Hollywood pane of 20 honoring actress Ingrid Bergman, who appeared in movies from Europe and the United States. The image of Bergman in the pane selvage at right is from the acclaimed 1942 romantic drama Casablanca, which also starred Humph 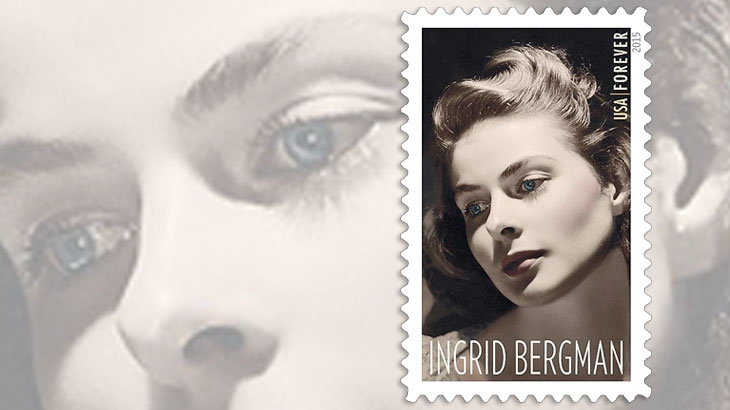 The Ingrid Bergman forever stamp is the 19th issue in the Legends of Hollywood series. The stamp will go on sale Aug. 20 as a joint issue with Sweden. Bergman was born in Stockholm. 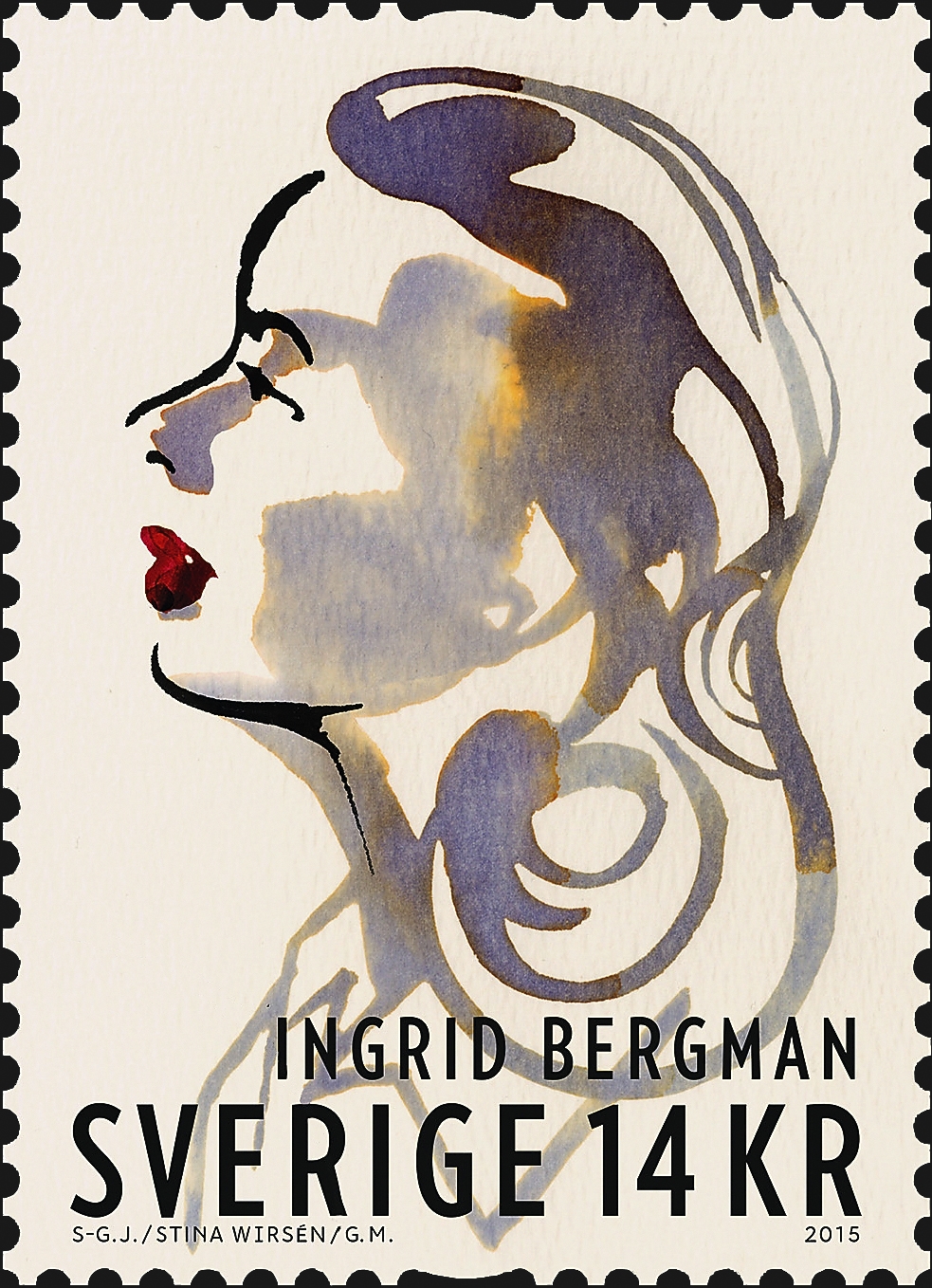 Sweden also will offer this Ingrid Bergman stamp Aug. 20 as a joint issue with the United States. The new stamp commemorates the birth centenary of the Swedish-born actress. 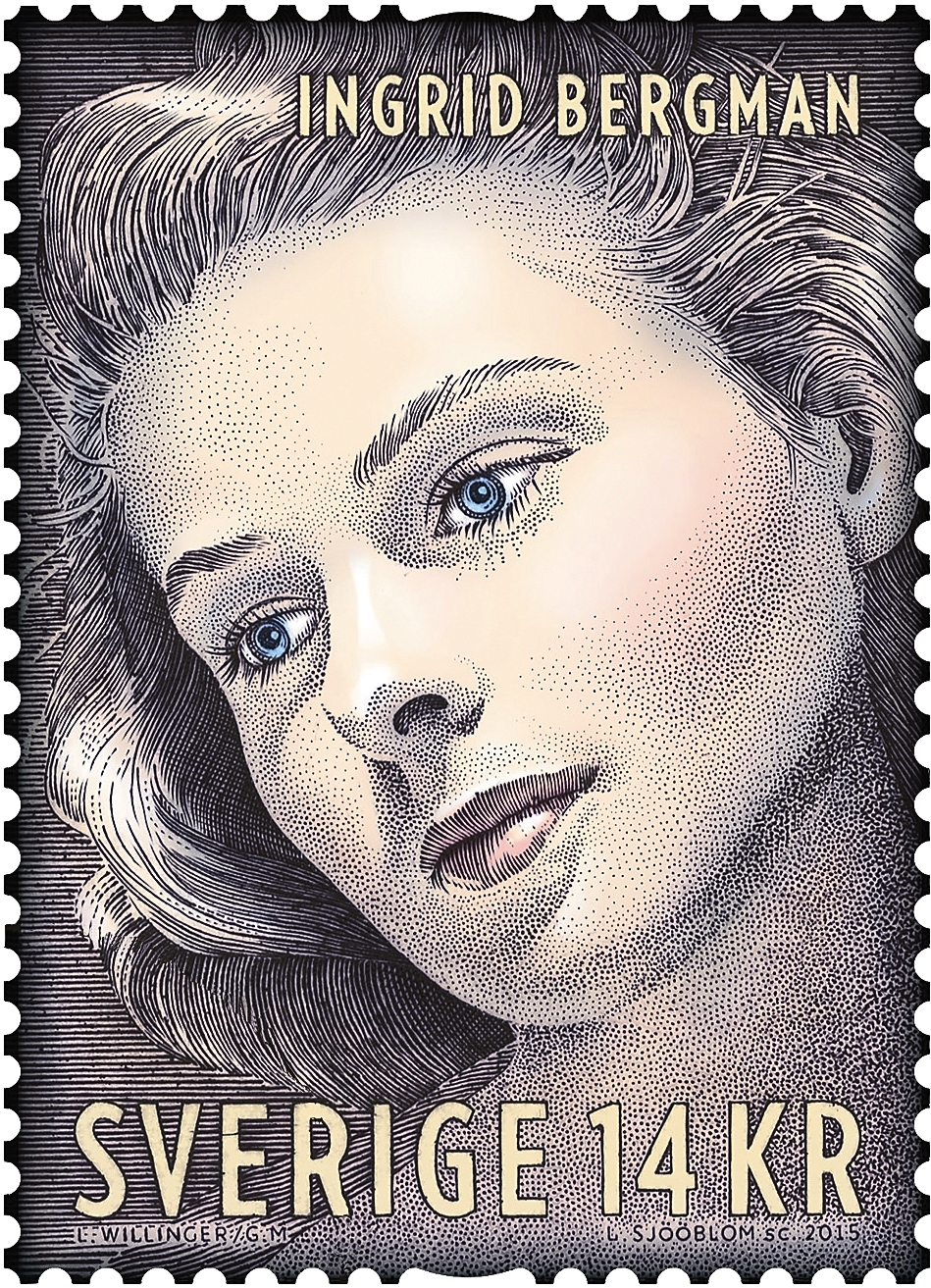 Sweden will offer this Ingrid Bergman stamp Aug. 20 as a joint issue with the United States. The new stamp commemorates the birth centenary of the Swedish-born actress.
Previous
Next

Swedish-born actress Ingrid Bergman, who starred in one of the most famous films of all time, Casablanca (1942), is being honored Aug. 20 on a new United States stamp in the Legends of Hollywood commemorative series.

The nondenominated (49¢) forever stamp is being issued in a pane of 20.

The stamp is also a joint issue with Sweden, which has printed two new 14-krona stamps depicting the famous actress. The Swedish stamps, with two different designs, will be offered in a single roll of 100.

Collectors in the United States will be able to purchase the Swedish Ingrid Bergman stamps from the U.S. Postal Service in a strip of four for $7.95 as USPS item 801216.

Both countries will issue their stamps Aug. 20, which is nine days before the centenary of Bergman’s birth in Stockholm on Aug. 29, 1915.

Although the U.S. stamps are being issued in Los Angeles, currently there is no first-day ceremony planned. A posting on the USPS website notes, “Special ceremonies will be held later.”

USPS spokesman Roy Betts told Linn’s Stamp News that Sweden Post is scheduled to reveal the stamp Aug. 24 at the Royal Theatre, Dramaten, in Stockholm, and that the stamp will be presented at the grand opening in Sweden of the documentary film Ingrid Bergman: In Her Own Words.

The Ingrid Bergman stamp is the 19th issue in the USPS Legends of Hollywood series, which has been honoring actors and directors annually since 1995, when the 32¢ Marilyn Monroe stamp (Scott 2967) was the first in the series. There were no new entries in the series in 2012 or 2013.

The stamp panes in this series all contain 20 stamps with decorative selvage that features a portrait of the honoree, often in an identifiable film scene.

For Bergman, that illustration depicts the actress in her role as Ilsa Lund in Casablanca, which is consistently ranked as one of the most popular films of all time.

This is the second pane in the stamp series to commemorate Casablanca in the margin illustration.

The third Legends of Hollywood issue in 1997 honored Bergman’s Casablanca co-star, Humphrey Bogart (Scott 3152). The image of Bogart on that pane shows the actor standing next to his character’s 1940 Buick Phaeton on the Casablanca airfield in the film’s final scene.

On the Bergman pane, she stands alone next to the same car from the same scene.

The stamp itself features a circa 1940 photograph of the young actress taken by Laszlo Willinger and delicately colorized by Kristen Monthei.

The margin portrait from the black-and-white classic has also been colorized.

The Bergman stamp was offset printed (with microprinting) by Banknote Corp. of America, on behalf of Sennett Security Products. A paragraph above Bergman’s margin portrait provides a brief biography of the actress:

“Ingrid Bergman (1915-1982) lit up the silver screen for decades, starring in a variety of European and American films. She won three Academy Awards, two Emmy Awards, and the Tony Award for Best Actress. She is best remembered for her timeless portrayals of Ilsa Lund in Casablanca (1942), Paula Alquist in Gaslight (1944), Anna Koreff in Anastasia (1956), and Alicia Hubermann in Notorious (1946).”

Bergman was a well-known actress in Sweden when she was cast in the role of Anita in the American version of Intermezzo: A Love Story in 1939. She had taken the same role in a Swedish version of the film just three years earlier.

Intermezzo introduced Bergman to American audiences, and the great success of the film made her a star.

She appeared in three new films in 1941 before completing Casablanca, which was a hit when it was released and remains an immensely popular classic almost 75 years later.

Bergman was married and had a young daughter, the future television journalist Pia Lindstrom, when an affair with married film director Roberto Rossellini resulted in pregnancy and sparked a backlash and criticism in the United States.

Bergman divorced her husband in 1950, moved to Europe, married Rossellini, and starred in several films that he directed. Together they had a son, Roberto, and two daughters, the actress Isabella Rossellini and her twin, Ingrid.

Bergman and Rossellini divorced in 1957, and she remarried the following year.

During her long career she also made films with directors Alfred Hitchcock, Ingmar Bergman (no relation), Jean Saks and others.

Along with her film career, Bergman performed on stage in London and elsewhere, and she also accepted occasional television roles.

She returned to the United States to great acclaim in 1956. Twelve years earlier she had won the Academy Award for Best Actress for her performance in Gaslight (1944), and upon her return to America she received the same award for Anastasia (1956).

Her third Oscar, for Best Supporting Actress, would come for her work on Murder on the Orient Express (1974).

In her final role she portrayed Israeli prime minister Golda Meir in a television biography, 1982’s A Woman Called Golda.

Collectors can order press sheets of the Ingrid Bergman stamp consisting of nine panes (180 stamps), either with or without the die cuts that normally separate individual stamps. The Postal Service has created 250 sheets with die cuts, and 500 without.

Standard ordering instructions apply. Collectors requesting first-day cancels are encouraged to purchase their own stamps and affix them to envelopes. The first-day cover envelopes should be addressed for return (a removable label may be used), and mailed in a larger envelope addressed to Ingrid Bergman Stamp, Manager, Retail, U.S. Postal Service, Los Angeles District, 7001 S. Central Ave., Los Angeles 90052-9614. Requests for first-day cancels must be postmarked by Oct. 19.

The Postal Service’s uncacheted first-day cover for the Ingrid Bergman stamp is item 473316 at 93¢. USPS item numbers for the stamp and FDC also appear in Linn’s 2015 U.S. Stamp Program.