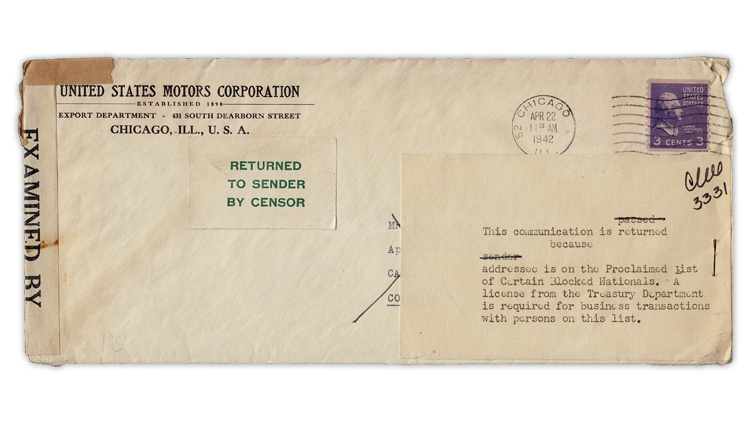 In the Jan. 9 issue of Linn’s Stamp News, The Odd Lot columnist Wayne L. Youngblood investigates a 1942 cover that ran afoul of the “Proclaimed List of Certain Blocked Nationals.”

The Jan. 9 issue of Linn’s Stamp News just landed on the presses and goes in the mail to subscribers Monday, Dec. 26. And if you subscribe to Linn’s digital edition, you’re at the head of the line with early access Saturday, Dec. 24. While you wait for your issue to arrive in your mailbox, enjoy these three quick glimpses of exclusive content available only to subscribers.

A 1942 cover to a blacklisted person in Colombia

In The Odd Lot, Wayne L. Youngblood highlights a most unusual cover mailed in 1942 from Chicago to an individual in Cali, Colombia. Youngblood focuses his attention on the label affixed to the cover in the lower right corner, which reads: “This communication is returned because addressee is on the Proclaimed List of Certain Blocked Nationals. A license from the Treasury Department is required for business transactions with persons on this list.” He goes on to explain that the list was enacted under an executive order issued by President Franklin Roosevelt April 10, 1940. The executive order “was specifically designed to prevent the Nazis from financing their occupations and other military campaigns with the use of U.S. financial resources,” Youngblood writes. Specifically the executive order empowered the U.S. Treasury Department to create a list of “certain block nationals” who were treated under the executive order as nationals of Germany or Italy. The rest of the column provides additional context to better understand the nature of this unusual list.

Tony Wawrukiewicz, in Modern U.S. Mail, features a “1926 United States airmail cover that went mostly via airmail from Seattle to New York City, by ship to London, then via airmail to Hanover, Germany.” Wawrukiewicz ran into difficulty when he tried to analyze the rate breakdown for the 34¢ postage affixed to the cover. So, he turned to postal historian Jay Stotts for assistance. Stotts provided a detailed explanation, which Wawrukiewicz shares in his column. Did the 34¢ franking, a 1923 24¢ carmine airmail stamp (Scott C6) and a 1926 10¢ dark blue airmail stamp (C7), exactly satisfy the various rates associated with the cover’s journey? You’ll have to read Stotts’ analysis to find out.

In each weekly issue of Linn’s, either E. Rawolik VI or E. Rawolik VII dissects the contents of a stamp mixture offered to collectors. E. Rawolik is a pseudonym that is also the word “kiloware” (a stamp mixture) spelled backward. This week, E. Rawolik VI looks over a one-third sample from a mixture of 125 worldwide stamps offered for $2 cash and a self-addressed, stamped envelope. A total of 136 stamps were received (9 percent more than promised), and 44 were selected at random for the review. Overall, the earliest stamp was issued in 1922, and the most recent arrived in 2017. An unused 1982 souvenir sheet came in with the highest Scott catalog value, at $3. Read the column to learn which country issued it.