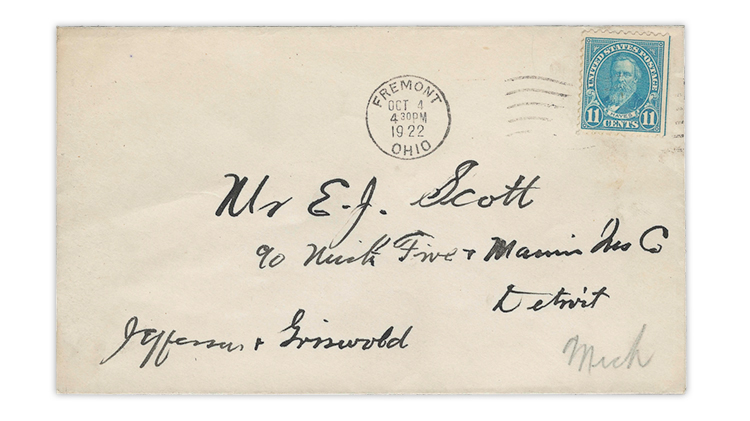 In Spotlight on Philately in the Aug. 15 issue of Linn’s Stamp News, Ken Lawrence reviews a forthcoming book celebrating the 100th anniversary of the United States Fourth Bureau Issue, a series of definitive stamps that began with the Oct. 4, 1922, first

The thick 100-page Aug. 15 monthly issue of Linn’s Stamp News just landed on the presses and goes in the mail to subscribers Monday, Aug. 1. And if you subscribe to Linn’s digital edition, you’re at the head of the line with early access Saturday, July 30. While you wait for your issue to arrive in your mailbox, enjoy these three quick glimpses of exclusive content available only to subscribers.

A centennial tribute to the Fourth Bureau issue

On Oct. 4, 1922, the United States Post Office Department issued the first stamp in a definitive series that collectors know as the First Bureau Issue, because it was the fourth series of ordinary stamps produced by the Bureau of Engraving and Printing. To mark the centennial of this important group of stamps, the United States Stamp Society is publishing a scholarly handbook titled The United States Fourth Bureau Issue 1922-1938. Ken Lawrence, in Spotlight on Philately, provides a nuanced and authoritative review. The book may be ordered from the United States Stamp Society, P.O. Box 3508, Joliet, IL 60434. The price is $40 for members, $45 for nonmembers, postpaid to U.S. addresses.

In Swiss Stamp Scene, Richard T. Hall introduces readers to the stamps of the 1933-42 Folk Costumes series. “There are 25 stamps in the series, one for each canton or half-canton at the time,” Hall writes. “There is no Folk Costumes stamp for the canton of Jura, which was not formed until 1978.” Hall pairs most of the stamps with a picture postcard that features a full-length image of a woman wearing the costume shown on the corresponding stamp. The stamps and postcards make for a philatelic feast for the eyes.

Larry Rosenblum’s Philately of France column returns to Linn’s this month after a brief hiatus. To kick things off, Rosenblum gives readers an entertaining look at the modern art wing of France’s extensive Art series that began in 1974. One of the more eye-catching Art stamps pictures The Thumb by Cesar (1921-98). “In 1965, Cesar was commissioned to create a piece for an exhibition called ‘The Hand from Rodin to Picasso,’” Rosenblum explains. “He made an impression of his thumb and expanded it into a 16-inch sculpture of translucent pink plastic. It was so popular that he continued to reproduce it in different sizes using various materials.” Several other famous works of art show up on other Art stamps, and Rosenblum has all the fascinating details. Rosenblum will review the Art series from 2000 to the present in his next column. Stay tuned.