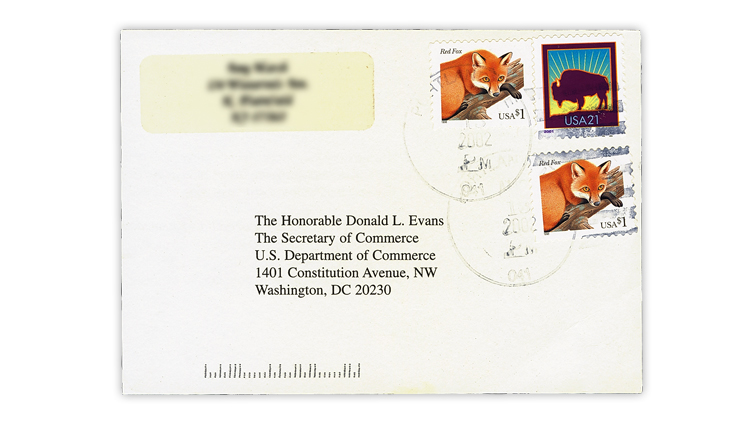 The dollar sign on the United States $1 Red Fox stamp is so small that it’s easily overlooked, as Charles Snee explains in Dollar-Sign Stamps in the June 6 issue of Linn’s Stamp News.

The June 6 issue of Linn’s Stamp News just landed on the presses and goes in the mail to subscribers Monday, May 23. And if you subscribe to Linn’s digital edition, you’re at the head of the line with early access Saturday, May 21. While you wait for your issue to arrive in your mailbox, enjoy these three quick glimpses of exclusive content available only to subscribers.

Mistaking the $1 Red Fox stamp for a 1¢ stamp

Dollar-Sign Stamps columnist Charles Snee takes a closer look at the United States $1 Red Fox stamps of 1998 and 2002. Specifically he zeros in on the “USA $1” inscription in the bottom right corner. “Of the five characters in ‘USA $1,’ the dollar sign is the smallest, which means that it can be easily overlooked,” Snee observes. “In other words, an inattentive mailer could mistake a $1 Red Fox stamp for a 1¢ stamp.” And that is exactly what happened in the case of the 2002 postcard illustrated here, which is franked with two $1 Red Fox stamps incorrectly used as 1¢ stamps in combination with a 2001 20¢ Bison stamp to satisfy the 23¢ domestic postcard rate. The $2.21 franking represents a substantial overpayment, but the result makes for a fascinating piece of modern postal history.

In an informative first-hand report, Dan Culbert shares some of the highlights of the May 4 first-day ceremony for the United States forever commemorative stamp honoring marine biologist Eugenie Clark. The ceremony was held at the Mote Marine Laboratory and Aquarium in Sarasota, Fla. “The entrance to the aquarium had photos and a time line of Clark’s career. Clark also could be seen in several photos with stamplike frames,” according to Culbert. Panes of the stamp and first-day covers were available for purchase, and Culbert notes that there “was a lot of interaction between staff, family and colleagues after the ceremony.” He also points out a subtle feature on the stamp that involves the face mask seen on Clark’s head. Culbert’s story is an engaging read you won’t want to miss.

William F. Sharpe, in Computers and Stamps, gives a positive review of the new subscription version of the Scott online catalogs, which is called the Scott Digital Catalogue Subscription. “The stamp listings are like those in the printed catalog, but they are arranged in a two-column format rather than the previous online four-column view of each page,” Sharpe explains. He then methodically shows readers how to navigate various sections of the online catalogs. Sharpe favorably notes that search results are returned quickly. For example, his search for “streetcars” in the six-volume Scott Standard Postage Stamp Catalogue yielded listing for 13 stamps. To learn more about the Scott Digital Catalogue Subscription, visit Amos Advantage.