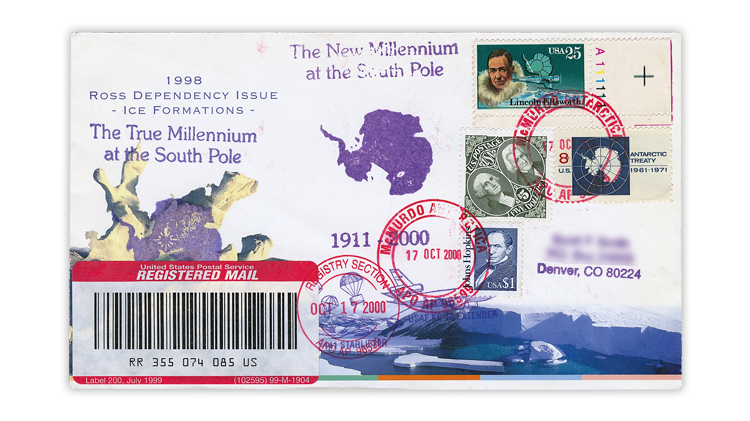 The Oct. 3 issue of Linn’s Stamp News just landed on the presses and goes in the mail to subscribers Monday, Sept. 19. And if you subscribe to Linn’s digital edition, you’re at the head of the line with early access Saturday, Sept. 17. While you wait for your issue to arrive in your mailbox, enjoy these three quick glimpses of exclusive content available only to subscribers.

A nifty registered cover from Antarctica

The vibrant registered cover illustrated here was mailed Oct. 17, 2000, from McMurdo Station, Antarctica, to Denver, Colo. In Dollar-Sign Stamps, Charles Snee shares some of the cover’s attributes that he found attractive. At the top of the list, according to Snee, “is the four-stamp franking on the theme of Antarctica that includes a 1994 $5 slate green Washington and Jackson stamp (Scott 2592) and a 1993 $1 blue Johns Hopkins stamp (Scott 2194e).” The two dollar-denominated stamps paid the $6 registry fee. Read on to learn why only 33¢ domestic first-class postage was required to mail cover over a distance of roughly 8,900 miles.

Hunting for words associated with Halloween

Linn’s regularly publishes three games to entertain readers: Trickies, a word scramble puzzle by Joe Kennedy; a word search puzzle by D.E. Rubin; and Philatelic Lexicon, a crossword puzzle by David Saks. In this week’s issue, the 24 hidden words in Rubin’s puzzle focus on Halloween. “Traditions associated with Halloween, originally known as All Hallow’s Eve, have been around for many centuries,” Rubin explains. “It was believed to be a time of year when evil spirits were abroad, and masks originally were worn so these spirits couldn’t tell who you were.” Sharpen your pencil and see how quickly you can find words such as Dracula, skeleton and wizard.

In each weekly issue of Linn’s, either E. Rawolik VI or E. Rawolik VII dissects the contents of a stamp mixture offered to collectors. E. Rawolik is a pseudonym that is also the word “kiloware” (a stamp mixture) spelled backward. This week, E. Rawolik VII sifts through a 59-stamp sample from a worldwide assortment offered for $10 by a dealer in Florida. “My first impression was that I had received stamps from an interesting variety of countries,” Rawolik writes. The stamps in the reviewed sample were issued from 1911 to 2019, with the earliest issue being a definitive (regular-issue) stamp from Portugal. The most recent was a semipostal stamp from Germany picturing the Brothers Grim fairy tale The Brave Little Hunter. One aspect of the reviewed sample surprised Rawolik. For the answer, read the full review in this issue.