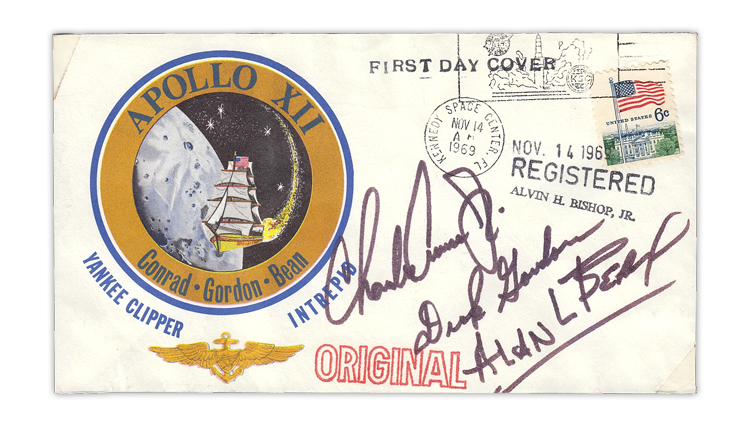 Only two elements on this Apollo 12 insurance cover are genuine. Wayne L. Youngblood has the details in The Odd Lot in the April 12 issue of Linn’s Stamp News.

The April 12 issue of Linn’s Stamp News just landed on the presses and goes in the mail to subscribers Monday, March 29. And if you subscribe to Linn’s digital edition, you’re at the head of the line with early access Saturday, March 27. While you wait for your issue to arrive in your mailbox, enjoy these three brief summaries of exclusive content available only to subscribers.

International business reply mail processed for return to the U.S.

Tony Wawrukiewicz, in Modern U.S. Mail, continues his exploration of international business reply mail that began in his column in the Feb. 8 issue of Linn’s. This month he highlights two covers “returned from a foreign country where foreign postage was used to return the items, but the items were not on the top of a stack of returns, so neither has postage due stamps affixed.” For each cover Wawrukiewicz explains how the franking satisfied the airmail rate in effect at the time. The cover returned from Costa Rica in 1969 is franked with Costa Rican stamps totaling 65 centimos paid, and the 1976 cover from the Netherlands is franked with a single 1972 50¢ lilac Queen Juliana definitive. Wawrukiewicz also provides helpful details concerning the domestic business reply mail postage and associated fees that each recipient had to pay once the covers arrived in the United States.

Linn’s Journal Entries column reports on recent journals and similar publications from national and international organizations. In this week’s column, Michael Baadke reviews the March issue of Precancel Forum, the monthly newsletter of the Precancel Stamp Society, which has been in existence for almost 85 years. Baadke focuses on a fascinating article about a missing-letter variety on a Marysville, Mich., precancel by dealer and precancel specialist Arnold Selengut. An illustration taken from Selengut’s article shows several stamps with the Marysville precancel variety, which is missing the second L in “Marysville.” “The society’s work in documenting and publishing research on precancels is nothing short of amazing,” Baadke writes. If you collect precancels, consider joining the Precancel Stamp Society. You’ll be glad you did.