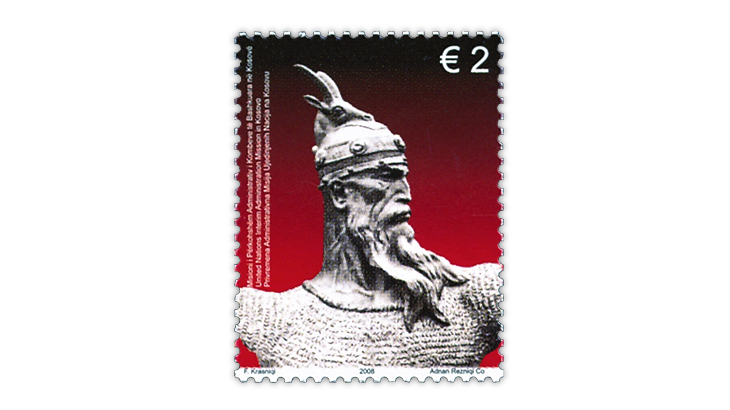 The March 22 issue of Linn’s Stamp News just landed on the presses and goes in the mail to subscribers Monday, March 8. And if you subscribe to Linn’s digital edition, you’re at the head of the line with early access Saturday, March 6. While you wait for your issue to arrive in your mailbox, enjoy these three quick glimpses of exclusive content available only to subscribers.

Rick Miller, in Stamps of Eastern Europe, traces the remarkable life and exploits of Gjergj Kastrioti, the dux bellorum (war leader) who “defended [Albania] from foreign invaders and conquest.” Miller explains that Kastrioti “earned the sobriquet Skanderbeg from his Ottoman Turkish adversaries. Skanderbeg translates as ‘Lord Alexander,’ a reference to Alexander the Great of Macedon and to the fact that Kastrioti fought the Ottoman Empire’s overwhelming force for more than 20 years without ever losing a battle.” Among the more impressive Skanderbeg stamps Miller pictures is a souvenir sheet Albania issued in 2005 to celebrate the 600th anniversary of the war leader’s birth. The six stamps and selvage feature a panoramic view of a battle between Skanderbeg’s forces and the Ottoman army. As for the Kosovo 2008 €2 Skanderbeg stamp shown here, you’ll have to read Miller’s column to appreciate its significance.

In First-Day Covers, Lloyd de Vries profiles Dennis Gilson, who collects FDCs with a dragon theme. Gilson began assembling his collection in 2018, the year the United States issued four Dragons forever stamps. Since then Gilson has added many covers to the collection. He told de Vries that his collection “is nowhere near complete, nor is it even a goal.” Gilson simply buys covers he likes. Two of Gilson’s dragon FDCs are illustrated with the column. One is an eye-catching Bella Cachets FDC for one of the 2018 Dragons stamps. De Vries observes that Gilson’s collection, “with no attempt at completeness and inclusion in it based on his taste, is for fun.” If you are looking for a cheerful reminder of why most of us got into stamp collecting, de Vries’ column is a good place to start.

In each weekly issue of Linn’s, either E. Rawolik VI or E. Rawolik VII dissects the contents of a stamp mixture offered to collectors. E. Rawolik is a pseudonym that is also the word “kiloware” (a stamp mixture) spelled backward. This week, E. Rawolik VII runs the numbers on a worldwide mixture from a dealer who promised that all stamps would have 2018 Scott catalog values of $1 or more. Rawolik found that the reviewed sample (45 of 68 stamps) contained 18 stamps valued at less than $1, per the 2021 Scott catalog. At the other end of the value spectrum, Rawolik counted an even 12 stamps valued between $5 and $11 each. Rawolik singles out an early U.S. airmail stamp that he was pleased to find in the mix. Read the column to discover why. Rawolik concludes on an upbeat note, explaining that the sample “included a number of interesting stamps that make stamp collecting such a great hobby.”