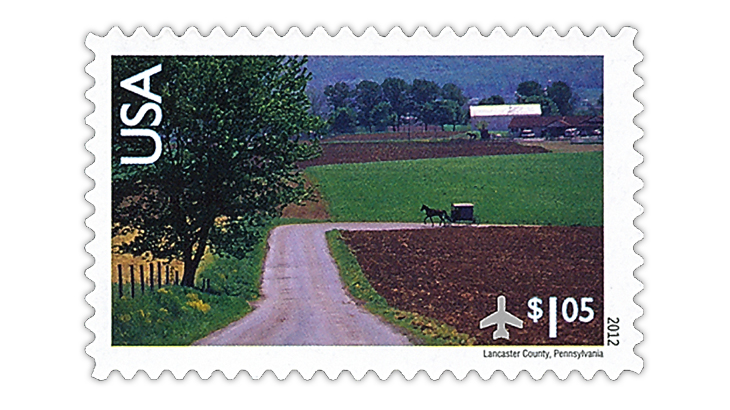 The April 5 issue of Linn’s Stamp News just landed on the presses and goes in the mail to subscribers Monday, March 22. And if you subscribe to Linn’s digital edition, you’re at the head of the line with early access Saturday, March 20. While you wait for your issue to arrive in your mailbox, enjoy these three brief summaries of exclusive content available only to subscribers.

The United States Postal Service’s Scenic American Landscapes series began in 1999 with a 48¢ stamp picturing Niagara Falls. In Dollar-Sign Stamps, Charles Snee recalls that debut and how he wondered at the time how long it might take for the series to get its first dollar-denominated stamp. “As it turned out, my wait lasted until the series concluded on Jan. 20, 2012, with the issuance of a $1.05 stamp (Scott C150) featuring James Amos’ photograph of a horse pulling an Amish buggy along a country road in Lancaster County, Pa.,” Snee writes. Snee provides production details for the $1.05 stamp and then explains how the stamp was intended to be used on international mail. He illustrates the proper use of the stamp on a cover mailed in December 2012 from California to Romania.

In this week’s installment of Stamp Identifier, the Linn’s editors provide key identification details for the stamps issued during the French occupation of the Libyan regions of Fezzan and Ghadames following World War II. Two stamps are illustrated to help collectors identify these Libyan back-of-the-book issues: a 1-franc black Djerma Oasis Monument from the 1949 Fezzan issue, and a 1949 Cross of Agadem from the 1949 Ghadames issue. If you’ve had difficulties identifying obscure stamps in the past, Stamp Identifier can be a great resource. Keep an eye out for it in future issues of Linn’s.