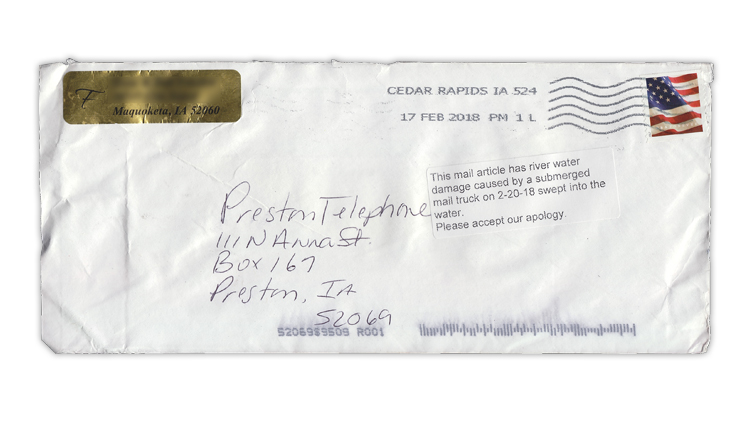 In The Odd Lot in the May 10 issue of Linn’s Stamp News, Wayne Youngblood teases out the fascinating story behind an unusual auxiliary marking on a cover that sustained significant water damage in early 2018.

The May 10 issue of Linn’s Stamp News just landed on the presses and goes in the mail to subscribers Monday, April 26. And if you subscribe to Linn’s digital edition, you’re at the head of the line with early access Saturday, April 24. While you wait for your issue to arrive in your mailbox, enjoy these three brief glimpses of exclusive content available only to subscribers.

A tale of philatelic sunken treasure in Iowa

The Odd Lot columnist Wayne L. Youngblood enjoys a good philatelic detective story. This month he casts his investigative eye on a cover mailed Feb. 17, 2018, from Maquoketa, Iowa, to a phone company in Preston, Iowa. Youngblood explains that the cover is “water damaged to the point of having a nearly complete setoff on the reverse from the face of another envelope.” The water damage occurred when a rental truck carrying mail destined for three Iowa towns (Preston, Miles and Sabula) slid off the road and became submerged in icy river water. This resulted in the mail being delayed for delivery. Thanks to the conscientious actions of the postmaster in Preston, a special label explaining the reason for the delay was affixed to the water-logged mailpieces, including the cover shown here. Youngblood’s account also includes excerpts from his interview with the Preston postmaster. Stories such as this make postal history come alive.

The first announcement of the availability of a certificate of mailing for United States mail appeared in the U.S. Post Office Department’s Postal Bulletin in July 1915. In Modern U.S. Mail, Tony Wawrukiewicz explains the intricacies of certificates of mailing and how the forms evolved to satisfy changes in mailing procedures. He illustrates two certificates in his column. The first was used in 1934 as a receipt for a parcel post package mailed to Shanghai, China. The second, used in 1941 for a parcel post item sent to Venezuela, reads, “RECEIPT for Ordinary Americo-Spanish Parcel Post Package.” Wawrukiewicz explains that this “Americo-Spanish receipt is for the Americo-Spanish Postal Union group of countries (later called the Postal Union of the Americas and Spain).” Be sure to dig into the entire column to learn more about these fascinating items of postal history.

Kitchen Table Philately: stamps with catalog value of $2 or more

In each weekly issue of Linn’s, either E. Rawolik VI or E. Rawolik VII dissects the contents of a stamp mixture offered to collectors. E. Rawolik is a pseudonym that is also the word “kiloware” (a stamp mixture) spelled backward. This week, E. Rawolik VII takes a look at a compact assortment of 35 stamps from 20 different countries. The reviewed stamps were issued from 1876 to 1995. Among the stamps Rawolik highlights is a 1913 14-kopeck Catherine II stamp from Russia. The dealer’s ad for the mixture promised stamps with a Scott catalog value of $2 or more, with a total catalog value of $120. Did the stamps live up to the promises? Read the column to find out.