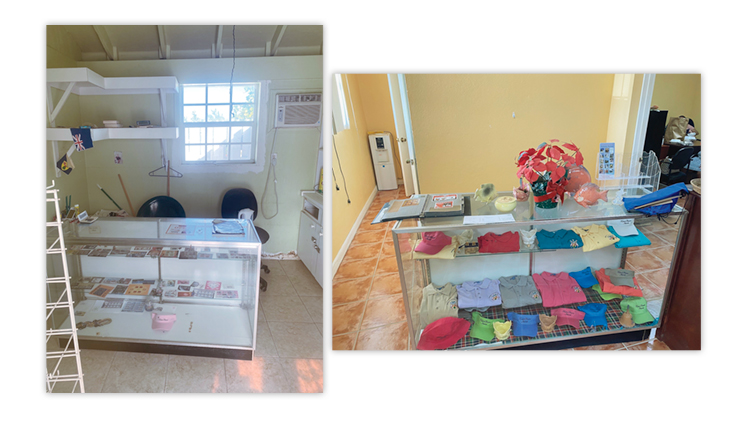 Philatelic tourist Chris Lazaroff recently visited the Turks and Caicos during a cruise. At Grand Turk, he eventually located the charming post office frequented by the local population, shown at right in this photo. The main post office, left, was closed

The Sept. 12 issue of Linn’s Stamp News just landed on the presses and goes in the mail to subscribers Monday, Aug. 29. And if you subscribe to Linn’s digital edition, you’re at the head of the line with early access Saturday, Aug. 27. While you wait for your issue to arrive in your mailbox, enjoy these three quick glimpses of exclusive content available only to subscribers.

A Visit to the Grand Turk post office for locals

Chris Lazaroff continues his philatelic explorations with a cruise stop at Grand Turk in the Turks and Caicos. During his brief stay, he managed to find (by way of a cab ride) the post office that local folks use. One of the two friendly clerks on duty let Lazaroff look through a stock book of commemorative issues. “To my surprise, the first page had Princess Diana commemorative sheets,” Lazaroff writes. “I thought such stamps were only printed for collectors and never saw the light of day at a Turks and Caicos post office. However, here they were ready for me to buy and use as postage.” One of the other issues he found commemorates the 50th anniversary of a certain spaceflight. Read the rest of Lazaroff’s entertaining story to get the details.

Wayne L. Youngblood, in this week’s The Odd Lot, teases apart the rather murky history behind two different printings of a purported essay for a stamp picturing Italian war hero Guiseppe Garibaldi. At first it was thought that the so-called essays were produced in 1848. However, Youngblood illustrates a photo of Garibaldi taken in 1860 that is the likely source for the phantom Garibaldi essay. “No matter what, this is a scarce issue (as is its doppelganger), but there are many questions that may never be answered regarding its origins and why there were two apparent printings,” Youngblood asserts. He goes on to summarize the differences between the two printings. The portraits of Garibaldi, in particular, are noticeably different from one another. There’s more to learn, so dig into the entire column.

“Over the years, I have been fortunate enough to acquire special return envelopes, including special Division of Dead Letters branch envelopes, that are quite unusual and rare,” begins Tony Wawrukiewicz in Modern U.S. Mail. He then provides a brief review of the transition of the Dead Letter Office to the Division of Dead Letters before explaining the importance of the creation of three dead letter bureaus in San Juan, Puerto Rico; Manila, the Philippines; and Honolulu, Hawaii. “The formation of these three dead letter bureaus probably occurred so that dead letters at such a distance from the continental United States could be expeditiously handled,” Wawrukiewicz explains. “The desire for such expeditious handling explains why the many dead letter branches were eventually introduced beginning in 1917.” Surviving postal history from dead letter bureaus is notably scarce — Wawrukiewicz illustrates the only bureau return envelope he has been able to find. It was mailed in 1931 from Honolulu to San Francisco.