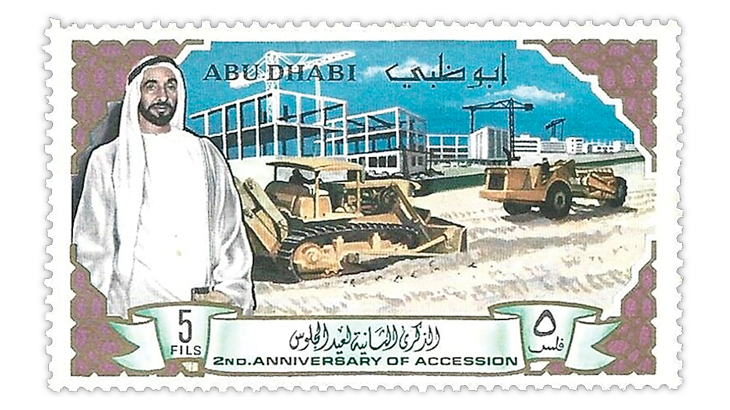 In 1969, Abu Dhabi issued three stamps to mark the second anniversary of the accession of Sheikh Zayed bin Sultan Al Nahyan. In Middle East Stamps in the March 7 issue of Linn’s Stamp News, Ghassan Riachi takes a closer look at this set.

The March 7 issue of Linn’s Stamp News just landed on the presses and goes in the mail to subscribers Monday, Feb. 21. And if you subscribe to Linn’s digital edition, you’re at the head of the line with early access Saturday, Feb. 19. While you wait for your issue to arrive in your mailbox, enjoy these three quick glimpses of exclusive content available only to subscribers.

“With the best of the best guiding him, Zayed developed his country into becoming a strong influence in the region, with its own defensive forces as well. Some might say that he brought Abu Dhabi into the light,” writes Ghassan Riachi in Middle East Stamps. In recognition of the second anniversary of Sheikh Zayed bin Sultan Al Nahyan’s accession and to highlight his accomplishments, Abu Dhabi issued a set of three stamps denominated 5 fils, 10f and 35f. The 5f stamp, which shows a new construction scene, is illustrated here. Riachi provides a detailed review of each stamp and gives a helpful summary of the stamps’ availability in various conditions. He also reviews postal history for the set and observes that covers “with handwritten ‘First Day of Issue’ manuscript in blue ink are known to exist, but they are scarce.” Be sure to read Riachi’s entire column to get all the details about these fascinating stamps

Relishing the hunt for dollar-sign covers to unusual destinations

In Dollar-Sign Stamps, Charles Snee introduces readers to one of his favorite pastimes — hunting for covers franked with United States dollar-denominated stamps sent to what he calls “overseas destinations not commonly encountered. He puts forward two such covers that he recently attracted his attention while searching through the U.S. postal history offerings on eBay. The first cover was sent via registered mail in 1992 from Portland, Ore., to Singapore, an island nation in southeast Asia. Medina, Saudi Arabia, was the destination of the second cover, which was sent from Santa Rosa, Calif., in 1991. Which dollar-sign stamps were used on these covers, you ask? You’ll have to read Snee’s column to find out.

Are you a chatty philatelist who is fond of coffee? If so, then find your way to the Bitter Grounds website, www.bittergrounds.com, which William F. Sharpe reviews in this month’s installment of Computers and Stamps. According to Sharpe, the website is a stamp blog that uses myriad references to coffee to entice people to contribute their musings. “The site owner is identified as Catpaw and offers membership at various levels. You don’t have to join, though, to read through the blog entries,” Sharpe explains. Numerous articles can be accessed via a list of subjects on the home page. For example, a story about stamps related to the COVID-19 pandemic mentioned Austria’s stamp printed on toilet paper. After reading Sharpe’s column, pour yourself a cup of coffee and carve out some time to visit Bitter Grounds.