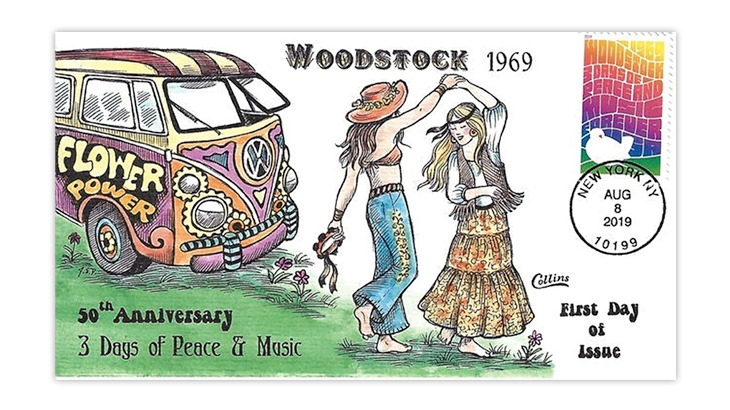 If you’re a member of the American First Day Cover Society, consider entering the society’s annual cachetmaking contest. Lloyd de Vries has all the details in First-Day Covers. Shown is a Collins FDC for the Woodstock 50th Anniversary stamp that took top

The July 26 issue of Linn’s Stamp News just landed on the presses and goes in the mail to subscribers Monday, July 12. And if you subscribe to Linn’s digital edition, you’re at the head of the line with early access Saturday, July 10. While you wait for your issue to arrive in your mailbox, enjoy these three quick glimpses of exclusive content available only to subscribers.

Are you a member of the American First Day Cover Society? Then you should consider entering the society’s annual cachetmaking contest. If you are not sure how to proceed, be sure to read Lloyd de Vries’ First-Day Covers column in this week’s issue. “To qualify for the contest, the FDCs must have been serviced in the previous calendar year. Most years there are 18 categories, including different media, non-United States and noncommercial FDCs, event covers, and duck covers,” de Vries explains. An inaugural category is also included in this year’s contest, in recognition of the inauguration of President Joe Biden and Vice President Kamala Harris. There is a fee to enter the contest, and “at least 10 copies of the cachet must have been produced,” de Vries writes. “Those entering certify that they or the cachetmakers either created the artwork or have permission to use it.” Much additional information about the contest is presented in the rest of the column, and de Vries concludes with some helpful pointers and resources that will aid your efforts when preparing a cachet for the contest. The results of the 2020 cachetmaking contest will be revealed Aug. 12 during the AFDCS president’s banquet at Great American Stamp Show in Rosemont, Ill.

Independence of the Baltic states as seen on stamps

Rick Miller, in Stamps of Eastern Europe, outlines the history of the Baltic states of Estonia, Latvia and Lithuania as seen on various postage stamps. He begins on a rather somber philatelic note by showing three stamps issued by the Soviet Union in 1960 to recognize the 20th anniversary of the annexation of the Baltic states in 1940. “The stamp designs show the flags of the Estonian, Latvian and Lithuanian Soviet Socialist republics, respectively, along with the skylines of Tallinn, Estonia; Riga, Latvia; and Vilnius, Lithuania,” Miller writes. He then summarizes key events following the declaration of independence of each state in 1918. One of the more colorful issues Miller uses to punctuate this history is a four-stamp souvenir sheet that Sierra Leone issued in 2018 to commemorate the 100th anniversary of Baltic independence. Additional stamps from the Baltic states are used to highlight key events such as the 1989 Baltic Way demonstration that saw more than 2 million people literally join hands “to form a human chain along the Baltic Way that stretched from Tallinn, to Riga, to Vilnius,” according to Miller. The 10th anniversary of the Baltic Way demonstration is honored on stamps from all three Baltic states. There’s much more to learn, and Miller’s column is great place to start.

In each weekly issue of Linn’s, either E. Rawolik VI or E. Rawolik VII dissects the contents of a stamp mixture offered to collectors. E. Rawolik is a pseudonym that is also the word “kiloware” (a stamp mixture) spelled backward. This week, E. Rawolik VII pores over a sample of 66 stamps from a packet advertised as containing 400 stamps. Rawolik received 395 stamps, but there was much of interest in the reviewed sample. Most of the stamps were valued at the Scott catalog minimum of 25¢, but one stamp surprised Rawolik with an $8.50 catalog value. You’ll have to read the column to learn the country and subject of this stamp.