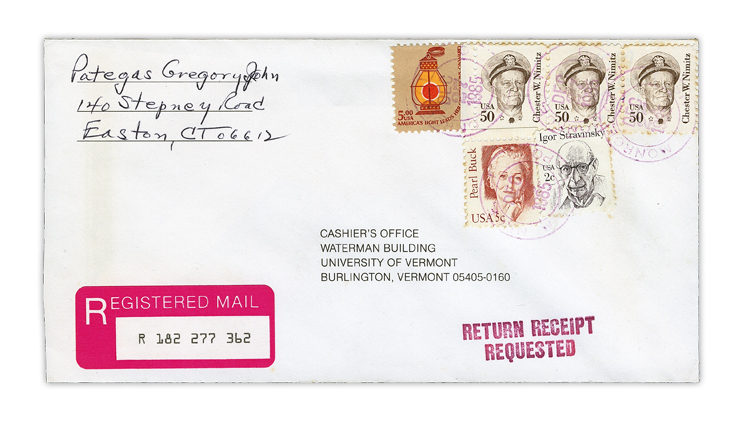 Dollar-Sign Stamps columnist Charles Snee found this United States 1985 registered $5 Americana cover during a recent visit to the Airpex show in Dayton, Ohio. He writes about the find in the Oct. 4 issue of Linn’s Stamp News.

The Oct. 4 issue of Linn’s Stamp News just landed on the presses and goes in the mail to subscribers Monday, Sept. 20. And if you subscribe to Linn’s digital edition, you’re at the head of the line with early access Saturday, Sept. 18. While you wait for your issue to arrive in your mailbox, enjoy these three quick glimpses of exclusive content available only to subscribers.

“On Aug. 28 I took a short drive from my house to attend the Airpex stamp show and exhibition in Dayton, Ohio. It was the first in-person show for me in almost three years,” writes Charles Snee in Dollar-Sign Stamps. Diligent searching at the show eventually turned up the 1985 registered cover franked with a United States $5 Americana and five Great Americans stamps, shown above. Snee provides additional details about the cover, including a precise rate breakdown of the $6.57 franking. Be sure to read the entire column to learn about a second $5 Americana cover that Snee acquired in 2003.

In Computers and Stamps, William F. Sharpe introduces readers to Linux, a free operating system available in different versions or distributions. Sharpe focuses on Linux Mint Cinnamon Edition, which replaced the Windows 10 system on his laptop computer. He goes on to discuss various Linux Mint features and other programs that philatelists can use to inventory their collections and create album pages. If you are looking to change up your philatelic computer skills, Sharpe’s column provides some helpful pointers.

Linn’s regularly publishes three games to entertain readers: Trickies, a word scramble puzzle by Joe Kennedy; a word search puzzle by D.E. Rubin; and Philatelic Lexicon, a crossword puzzle by David Saks. In this week’s issue, Rubin sends readers on a search for 22 U.S. stamps beginning with the P. Hidden in the puzzle grid is one of the two stamps honoring poet and writer Edgar Allan Poe. Do you know when they were issued? Rubin points out that “Poe is credited with inventing the modern mystery story, and the Mystery Writers of America named their annual awards after him.” Have fun looking for the other 21 stamps.