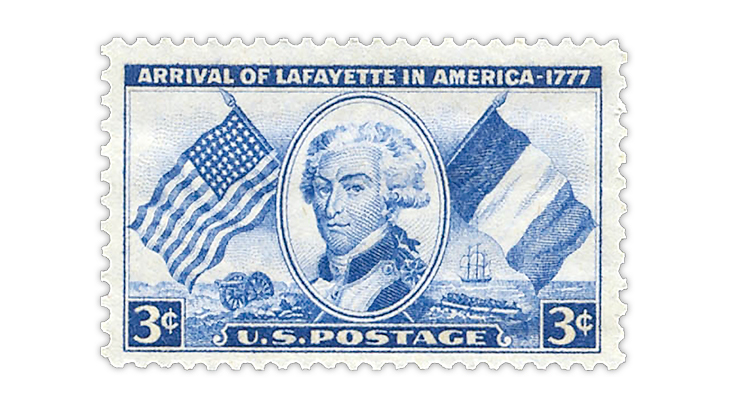 The Jan. 4 issue of Linn’s Stamp News just landed on the presses and goes in the mail to subscribers Monday, Dec. 21. And if you subscribe to Linn’s digital edition, you’re at the head of the line with early access Saturday, Dec. 19. While you wait for your issue to arrive in your mailbox, enjoy these three capsule summaries of exclusive content available only to subscribers.

Lawrence F. Skalak III, in an informative feature article, highlights the history of the Marquis de Lafayette, the renowned French nobleman who play a critical role in helping the American colonies break free from Great Britain. “Upon hearing about the outbreak of the American Revolution, he purchased a ship, equipped it with his own money, and sailed for America. He also convinced 11 other French officers to join him,” writes Skalak. Not long after Lafayette arrived in America, he was commissioned a major general and soon afterward joined the staff of Gen. George Washington. Skalak notes that “Washington considered Lafayette the son he never had.” Most of the seven stamps Skalak uses to tell his story will be familiar to United States collectors. This is a story you won’t want to miss.

How to request a special cancellation; minimizing mistakes

In First-Day Covers Lloyd de Vries reviews the key steps in the process to request a special event postmark to honor a significant event or anniversary. By way of example, de Vries draws attention to a Linn’s reader who designed an event cancel “to salute his son’s brewery and restaurant, the Buoy Beer Company in Astoria, Ore.” The reader also created a personalized Stamps.com postage label and designed a special cacheted envelope to honor his son’s achievement. A special event cancel costs $25, and deVries reminds readers that “the city and state in the postmark must have a post office.” Given the cost and other factors, you obviously want to avoid mistakes when requesting an event cancel from the U.S. Postal Service’s Cancellation Services. Therefore, be sure to read deVries’ list of helpful tips in the second half of the column.

In each weekly issue of Linn’s, either E. Rawolik VI or E. Rawolik VII dissects the contents of a stamp mixture offered to collectors. E. Rawolik is a pseudonym that is also the word “kiloware” (a stamp mixture) spelled backward. This week, E. Rawolik VII sifts through a one-fourth sample from a mixture of 257 worldwide stamps with low catalog values. A total of 28 countries were represented among the 64 stamps in the sample. Switzerland, with seven stamps, came out on top, followed by South Africa and Spain, with six stamps each. Most of the stamps were valued at the Scott catalog minimum value of 25¢. The stamp with the highest catalog value, $2.75, was a 1926 Albanian postage due. Overall, Rawolik was pleased with the stamps: “… the number of stamps was in excess of what was advertised, and while the value was low it was in line with the cost.” Be sure to read the entire review. Perhaps you’ll be tempted to order a mix from the same dealer.