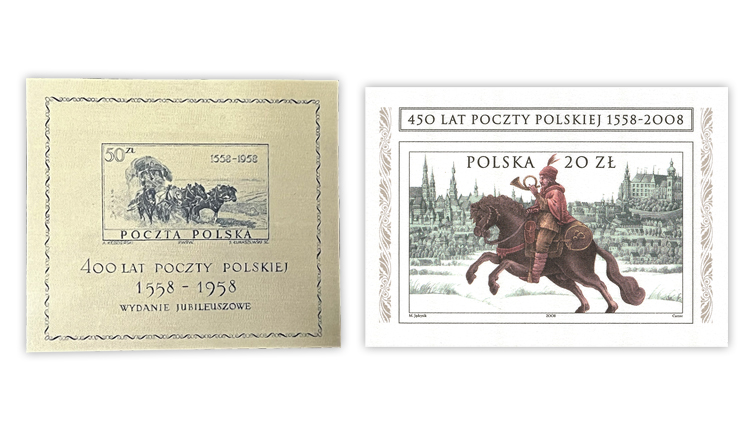 In a feature article in the May 16 issue of Linn’s Stamp News, Wayne Chen takes readers on a guided tour of more than a dozen countries that have issued stamps and souvenir sheets printed on silk. Shown here are two souvenir sheets from Poland that are pr

The May 16 issue of Linn’s Stamp News just landed on the presses and goes in the mail to subscribers Monday, May 2. And if you subscribe to Linn’s digital edition, you’re at the head of the line with early access Saturday, April 30. While you wait for your issue to arrive in your mailbox, enjoy these three quick glimpses of exclusive content available only to subscribers.

An introduction to stamps and souvenir sheets printed on silk

“The topic of stamps and souvenir sheets printed on silk fabric started in 1958 with a souvenir sheet from Poland. Silk stamps and sheets both look and feel different, adding a third dimension and enhancing the sense of touch. It has become a popular topic for collectors and has reached many corners of the world since 1958,” writes Wayne Chen in an engaging feature article. His focus is on “stamps and souvenir sheets printed on 100 percent silk or with a very high silk content.” He excludes stamps printed on paper with silk fibers and silk cacheted covers. Chen looks at various silk stamps from more than a dozen countries. Italy, for example, issued an imperforate souvenir sheet in 2001 to celebrate the Italian silk industry. A 2015 silk souvenir sheet from China honors Bao Zheng, also known as Lord Bao. The other stamps and sheets that Chen discusses are just as interesting and eye-catching. A highlight is Liechtenstein’s first silk issue: a 2013 souvenir sheet of three showing a silk wall covering in the Liechtenstein Palace in Vienna.

In Spotlight on Philately, Ken Lawrence provides a detailed and fascinating review of the first year of operations for Pan American Airways Africa during World War II. Using more than two dozen covers and related maps, Lawrence shows how Pan Am routes to and across Africa grew into the world’s longest and most important air transport service between December 1941 and December 1942. “In combination these routes were among the most innovative and formidable in aviation history. Collecting postal remnants that illuminate the breadth and depth of those achievements can pose a daunting challenge,” Lawrence writes. Collectors of WWII postal history will appreciate how the evolution of U.S. Foreign Air Mail route No. 22 during the war created covers that are much sought-after and highly prized today. This column is sure to become an invaluable reference. Be sure to keep it close at hand.

The respected universities of Oxford and Cambridge have been with us for centuries. But as Matthew Healey explains in Great Britain Philately, there was a brief time when both venerable institutions of higher learning issued their own stamps. “For a decade and a half, from 1871 to 1886, eight of the colleges at Oxford and three at Cambridge issued stamps that were legitimately used on local mail,” he writes. During this time period, a number of interesting local stamps were created and used on mail carried by messengers on the Oxford and Cambridge college campuses. According to Healey, “The services were restricted to the members of the organizing college, with college staff delivering the messages.” Despite this, the postmaster general argued that the messenger services and their stamps infringed upon the post office’s monopoly. Healey provides a fascinating overview of these stamps and the philatelic legacy they left behind.