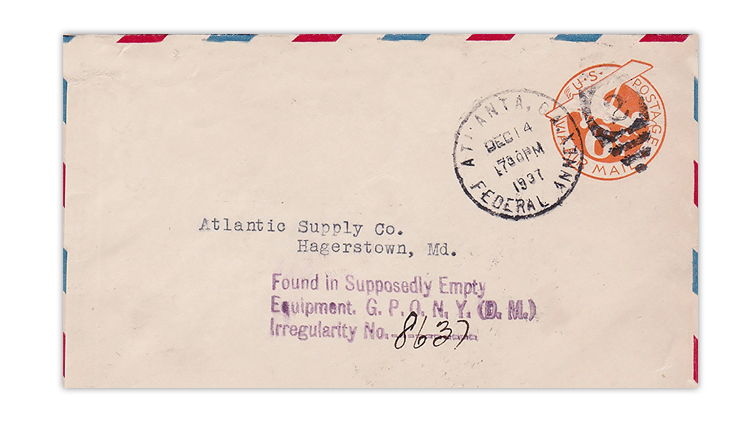 What circumstances prompted a postal clerk in New York City to apply the “Found in Supposedly Empty Equipment” auxiliary marking on this 1937 airmail cover? Tony Wawrukiewicz has some answers in Modern U.S. Mail in the Sept. 13 issue of Linn’s Stamp News.

The Sept. 13 issue of Linn’s Stamp News just landed on the presses and goes in the mail to subscribers Monday, Aug. 30. And if you subscribe to Linn’s digital edition, you’re at the head of the line with early access Saturday, Aug. 28. While you wait for your issue to arrive in your mailbox, enjoy these three quick glimpses of exclusive content available only to subscribers.

Auxiliary markings are applied to mail for myriad reasons. In Modern U.S. Mail, Tony Wawrukiewicz takes a close look at an irregularity that occurred when a 1937 airmail cover was in transit from Atlanta to Hagerstown, Md. At some point in its journey, the cover, pictured here, ended up in New York City. Wawrukiewicz provides a plausible explanation for the “Found in Supposedly Empty Equipment” auxiliary marking that was applied to the cover during its unexpected detour. Aside from an obvious delay that the wording of the marking points out, its appearance on the cover served another useful purpose for the Post Office Department. What do you think that purpose might be?

Celebrating the artifacts of philatelic artifacts

The Odd Lot columnist Wayne L. Youngblood enjoys collecting stamps issued on June 11, the date of his birth. Of particular interest to him in this month’s column is a noncacheted June 11, 1929, first-day cover of the United States 2¢ Electric Light’s Golden Jubilee coil stamp (Scott 656). Youngblood writes that “this cover, and the artifacts it later produced, reads a bit like a who’s who in FDC philately, covering several decades.” Among the more significant items associated with the cover is a note from Hugh M. Southgate (1871-1940), a highly respected expert on U.S. stamps. Youngblood pictures Southgate’s note and two other notable items linked to this cover. Read the column for the rest of the story.

The story behind the portrait on the Slania joint issue

In a feature article, Wayne Chen shares a fascinating behind-the-scenes story about the Faroe Islands, Greenland and Denmark souvenir sheets that were recently issued in celebration of the 100th birth anniversary of master engraver Czeslaw Slania. “It was a once-in-a-lifetime experience for me and an honor to provide the original photo of Slania I took more than 24 years ago to be used as the basis of the stamps engraved by [Martin] Morck for the three postal administrations,” Chen writes. The souvenir sheets were unveiled Aug. 12 at Great American Stamp Show in Rosemont, Ill. There’s more to the story, and Chen has the details.