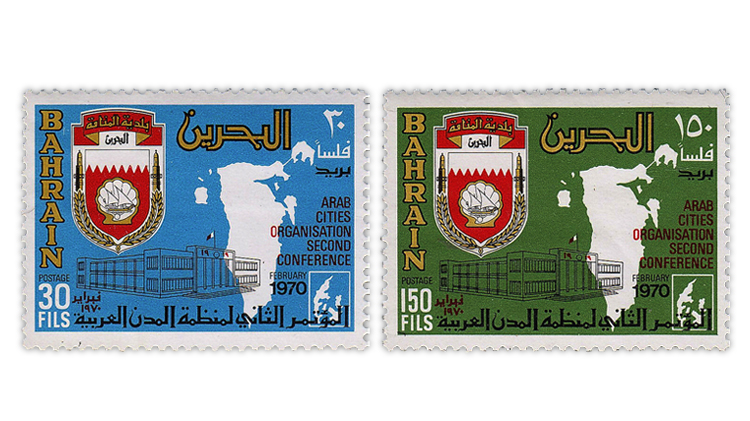 In 1970 Bahrain issued two stamps to recognize the second conference of the Arab Cities Organization. Ghassan Riachi has the details in his Middle East Stamps column.

The Oct. 25 issue of Linn’s Stamp News just landed on the presses and goes in the mail to subscribers Tuesday, Oct. 12. And if you subscribe to Linn’s digital edition, you’re at the head of the line with early access Saturday, Oct. 9. While you wait for your issue to arrive in your mailbox, enjoy these three quick glimpses of exclusive content available only to subscribers.

“The second conference of the Arab Cities Organization was held in Bahrain. The government of Bahrain decided to celebrate this event on a set of two multicolored stamps denominated 30 fils and 150f,” writes Ghassan Riachi in Middle East Stamps. Riachi provides a detailed description of the stamps’ ornate design, which features numerous inscriptions, maps and the official crest of the municipality of Manama, the capital of Bahrain. He also provides a summary of the stamps’ market availability and illustrates a colorful first-day cover franked with both stamps that is postmarked Feb. 23, 1970, and addressed to the Arabian Philatelic Association in Dhahran, Saudi Arabia. If you collect Bahrain, this set is worth pursuing.

Thoughts on the state of the first-day cover specialty

In First-Day Covers, Lloyd de Vries takes stock of quantitative factors such as the number of FDCs serviced for a new United States stamp and how they relate to the health of FDC specialty. He argues persuasively that such numbers shouldn’t be taken too seriously. More useful pulse points, in de Vries’ opinion, include the number of competitive FDC exhibits and the number of those exhibits winning top awards. Also important are membership in the American First Day Cover Society and how well FDC dealers are doing at shows. De Vries concludes with a pitch for the AFDCS Directory of Current Cachetmakers, which is available as a free download on the afdcs.org website.

In each weekly issue of Linn’s, either E. Rawolik VI or E. Rawolik VII dissects the contents of a stamp mixture offered to collectors. E. Rawolik is a pseudonym that is also the word “kiloware” (a stamp mixture) spelled backward. This week, E. Rawolik VII looks over an assortment of stamps from Norway issued between 2006 and 2020. A total of 48 of the 55 stamps were valued at $1 or more in the Scott catalog. A 2011 50-krone stamp celebrating the bicentennial of the Oslo Stock Exchange came in with the highest catalog value. Dig into the column to learn the amount.