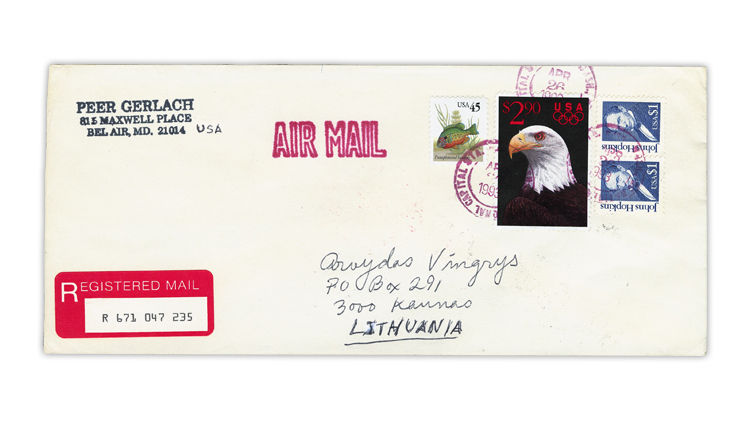 In Dollar-Sign Stamps in the March 1 issue of Linn’s Stamp News, Charles Snee takes a closer look at the production and postal history of the 1991 $2.90 Bald Eagle Priority Mail stamp.

The March 1 issue of Linn’s Stamp News just landed on the presses and goes in the mail to subscribers Monday, Feb. 15. And if you subscribe to Linn’s digital edition, you’re at the head of the line with early access Saturday, Feb. 13. While you wait for your issue to arrive in your mailbox, enjoy these three quick glimpses of exclusive content available only to subscribers.

Dollar-Sign Stamps columnist Charles Snee introduces the 1991 $2.90 Priority Mail stamp picturing a bald eagle, one of his favorite United States high-denomination stamps, by observing that the stamp appears on the cover of Linn’s U.S. Stamp Yearbook 1991. Snee reviews some of the stamp’s production process, with an emphasis on how U.S. Postal Service designer Terrence McCaffrey selected a photograph of the majestic bird for the stamp. He also mentions the two known errors for the stamp and highlights an important caveat in the Scott Specialized Catalogue of United States Stamps and Covers regarding “imperforate examples of the $2.90 Eagle in multiples such as gutter pairs and blocks.” Snee then discusses postal history of the stamp by way of two covers. One is a proper solo franking on a No. 10-size envelope that was sent via Priority Mail in 1991 from Wilmington, N.C., to Gettysburg, Pa. The other cover was sent via registered mail in 1993 from Washington, D.C., to Kaunas, Lithuania, and features the $2.90 Eagle in combination with other stamps to pay the required registry fee and first-class postage. Read the column for the complete rate breakdown.

“The American Philatelic Research Library opened a greatly expanded online catalog on Feb. 1,” announces William F. Sharpe in Computers and Stamps. Specifically Sharpe is referring to the David Straight Memorial Philatelic Union Catalog, which is hosted by the APRL on its website. The term “union” in the Straight catalog’s name indicates that you can search the holdings of multiple philatelic libraries. He methodically explains how to conduct simple and advanced searches and points out some of the tabs and links on the catalog website. “The ‘My Bookbag’ tab is similar to the shopping cart on other websites. It shows items that you wish to purchase or borrow from the libraries,” Sharpe writes. The “Used Books for Sale” link connects to a large list of books that may be purchased; the listing for each book shows the price and email address for ordering. Keep Sharpe’s column close at hand to get the most from this essential philatelic research tool.

Kitchen Table Philately: worldwide stamps for less than 2¢ each

In each weekly issue of Linn’s, either E. Rawolik VI or E. Rawolik VII dissects the contents of a stamp mixture offered to collectors. E. Rawolik is a pseudonym that is also the word “kiloware” (a stamp mixture) spelled backward. This week, E. Rawolik VII breaks down a sample of 66 stamps from a packet of worldwide stamps that cost less than 2¢ per stamp. Of the 14 countries represented in the sample, East Germany had 11 stamps, followed by Czechoslovakia, Germany and Poland, with eight stamps each. Rawolik draws attention to two stamps from Czechoslovakia and Poland that celebrate International Women’s Year in 1975. “The 30-haler stamp from Czechoslovakia depicts a young woman’s face and a globe,” writes Rawolik. Also highlighted in Rawolik’s narrative are three Czechoslovakian postage due stamps picturing stylized flowers. Enjoy the full review in this issue.