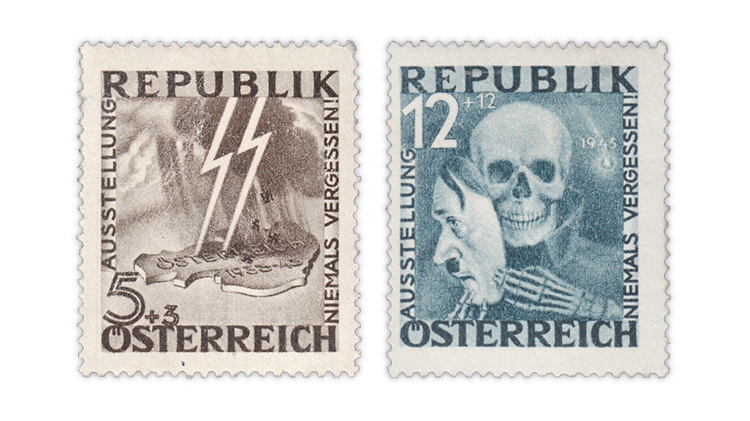 The designs of these two Austria 1946 Anti-Fascist semipostal stamps were found to be too graphic and upsetting. Wayne L. Youngblood explores the history behind these stamps in The Odd Lot in the March 14 issue of Linn’s Stamp News.

The March 14 issue of Linn’s Stamp News just landed on the presses and goes in the mail to subscribers Monday, Feb. 28. And if you subscribe to Linn’s digital edition, you’re at the head of the line with early access Saturday, Feb. 26. While you wait for your issue to arrive in your mailbox, enjoy these three quick glimpses of exclusive content available only to subscribers.

In The Odd Lot, Wayne L. Youngblood takes a closer look at a set of eight Austrian semipostal stamps that were prepared for issue in 1946 to support an anti-Fascist exhibition held in Vienna, Austria. Two of the stamps, which are shown here, ran into difficulties. As Youngblood explains, the occupying Allied forces at the time raised objections to the stamps. “Despite the fact some of the other designs are rather graphic, the Allies felt these two designs were too incendiary and ordered them destroyed and replaced with new designs,” Youngblood writes. He notes that the Anti-Fascist semipostals received no immediate attention in the philatelic and general press after they were issued Sept. 16, 1946. A limited number of the rejected stamps found their way into the philatelic market. The number that have survived is unknown, according to Youngblood.

“The United States Postal Service celebrated its 50th anniversary as a quasi-independent government agency in 2021. With that in mind, a look back at U.S. postal rates in 1971 yields some surprises,” writes Ronald Blanks in a fascinating feature. Among those surprises was the possibility of issuing a 7½¢ stamp to satisfy a new first-class letter rate. To provide context, Blanks reviews the impact of the Postal Reorganization Act that went into effect Aug. 12, 1970. The act allowed the setting of temporary rates while the Postal Rate Commission reviewed the Post Office Department’s rate case that was filed Feb. 1, 1971. New rates took effect on May 16, 1971, six weeks before the POD became the U.S. Postal Service. As Blanks explains, the PRC took many months to complete its work on the rate case. And that precipitated some rather interesting developments in the U.S. stamp program.

In each weekly issue of Linn’s, either E. Rawolik VI or E. Rawolik VII dissects the contents of a stamp mixture offered to collectors. E. Rawolik is a pseudonym that is also the word “kiloware” (a stamp mixture) spelled backward. This week, E. Rawolik VII reviews half of a mixture of worldwide stamps. The 58 reviewed stamps from 26 countries are recent, with the earliest issued in 1996 and the latest in 2020. Among the numerous highlights are two stamps from Ireland and Jersey that each have a Scott catalog value of $7. “This mixture is a temptation itself,” asserts Rawolik. Enjoy the full review in this issue.