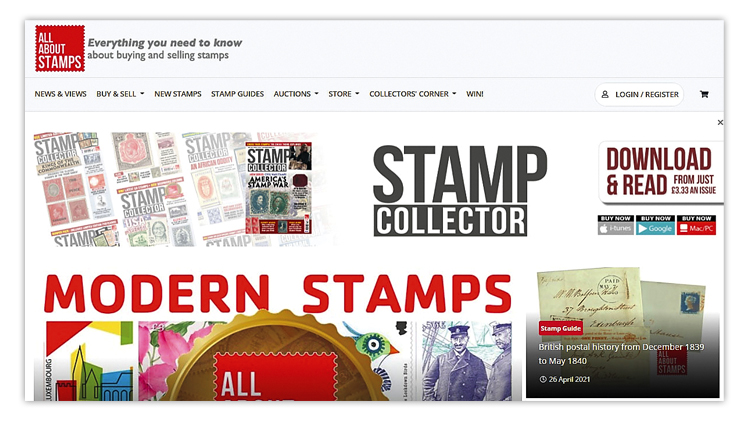 In Computers and Stamps in the July 5 issue of Linn’s Stamp News, William F. Sharpe introduces readers to the Libby app, which can be used to borrow online books and magazines using a library card. Shown is part of the website of Stamp Collector, a Britis

The July 5 issue of Linn’s Stamp News just landed on the presses and goes in the mail to subscribers Monday, June 21. And if you subscribe to Linn’s digital edition, you’re at the head of the line with early access Saturday, June 19. While you wait for your issue to arrive in your mailbox, enjoy these three brief summaries of exclusive content available only to subscribers.

If you enjoy borrowing books and magazines from your local library, consider getting the Libby app, which allows you to borrow online publications using your library card. Computers and Stamps columnist William F. Sharpe recently used Libby to find Stamp Collector, a British monthly magazine. Libby allows him to borrow any issue of Stamp Collector from December 2019 to date for 21 days. “Libby is available for mobile devices from the Apple App-store and Google Play Store. The app is free. There is also a website, libbyapp.com, where you can read these issues on your desktop computer,” Sharpe explains. He then takes readers through an informative guided tour of several recent issues of Stamp Collector. The May 2021 issue, for example, celebrates stamps of the American Civil War. An article titled “Searching for Perfection” in the February 2021 issue “considered candidates for the perfectly designed postage stamp,” Sharpe writes. Sharpe pictures two of the stamps in his column. One is a U.S. stamp issued in 1898 and the other is a 1929 stamp from Canada. Read the column to learn more about these two famous stamps.

Lloyd de Vries, in First-Day Covers, provides a review of proposed increases to selected rates and fees that will impact FDC servicers in the United States. If approved, these new rates will be effective Aug. 29. Post office box rental fees could jump slightly more than 9 percent, and the fees charged by Stamp Fulfillment Services could rise more than 7.5 percent, according to de Vries’ review of the recent filing with the Postal Regulatory Commission. “For FDC servicers who can’t find new stamp issues at their local post offices or within a reasonable distance, that means the pane of 20 58¢ stamps will not cost you $11.60, but $13, or 65¢ per stamp,” according to de Vries. In light of these expected increases, de Vries provides helpful tips for getting first-day covers serviced correctly via USPS Cancellation Services. He recommends sending a sketch or mock-up so “you will leave no doubt about how you want the end product to appear.” De Vries concludes by providing answers to frequent FDC questions. For instance, official U.S. first-day cities were first designated in 1922. Another question is, which U.S. stamp became the first to have an official first day? The answer can be found near the end of the column.

“In August 1918, the United States Post Office Department issued its first bicolor dollar-denominated stamps: a $2 orange red and black (Scott 523) and a $5 deep green and black (524),” writes Charles Snee in Dollar-Sign stamps. Both stamps feature a left-facing profile of Benjamin Franklin that also is seen on numerous low-denomination stamps in the long-running Washington-Franklin series of definitive (regular-issue) stamps. Snee reviews the stamps’ production details and summarizes their relative scarcity by comparing their values in the Scott Specialized Catalogue of United States Stamps and Covers. Postal history for both stamps is uncommon. “Examples used on standard-size covers are decidedly scarce,” according to Snee. The cover Snee illustrates represents a “somewhat more unusual use of the $2 Franklin.” Hint: It is flight cover of a rather well-known German airship. Dig into the column for the rest of the details.