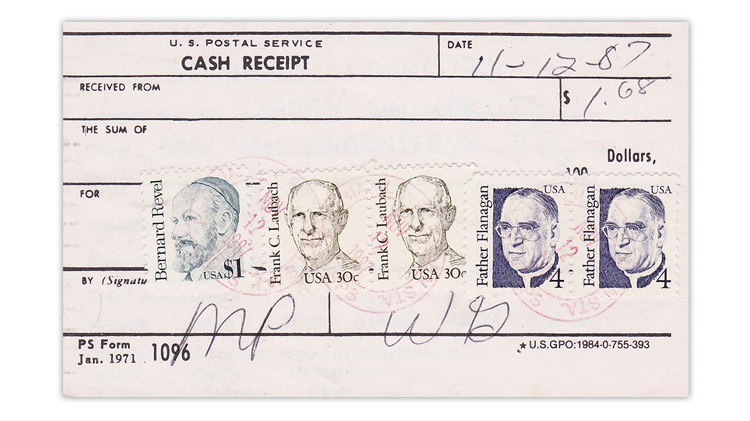 In Modern U.S. Mail in the July 12 issue of Linn’s Stamp News, Tony Wawrukiewicz casts a discerning eye on the U.S. Postal Service’s Form 1096, which is commonly used as a cash receipt.

The July 12 issue of Linn’s Stamp News just landed on the presses and goes in the mail to subscribers Monday, June 28. And if you subscribe to Linn’s digital edition, you’re at the head of the line with early access Saturday, June 26. While you wait for your issue to arrive in your mailbox, enjoy these three quick glimpses of exclusive content available only to subscribers.

Cash receipts paid with postage due and regular stamps

Form 1096 was often used as a cash receipt by the U.S. Post Office Department and its successor, the U.S. Postal Service. It was also used for numerous other purposes, as Tony Wawrukiewicz explains in Modern U.S. Mail. Some examples include indicating payment for postal notes, as a receipt for the payment of fees for services such as money orders and Express Mail, and, during World War II, as a receipt for savings stamps. Wawrukiewicz illustrates two examples of Form 1096, the second of which is illustrated here. It served as a receipt in 1987 for a $1.68 payment for what Wawrukiewicz calls “an unspecified postal service.” The form is franked with a colorful group of Great Americans definitive stamps: a $1 Bernard Revel, a pair of the 30¢ Frank C. Laubach and a pair of the 4¢ Father Flanagan. Read the column to learn about the other Form 1096 that Wawrukiewicz highlights. It was used in 1973 and bears a single postage due stamp.

How do you collect an EKU digital postmark?

In The Odd Lot, Wayne L. Youngblood takes a close look at the U.S. Postal Service’s short-lived experiment with using digital postmarks when sending email. “The idea was that sensitive email could be sent securely sealed through the Postal Service’s routing and encrypting program for a fee. It would then be electronically delivered with a digital postmark applied,” Youngblood explains. The June 13, 1996, digital postmark that Youngblood pictures is the earliest-known use (EKU) of such a postmark. The USPS officially launched its email test program in August 1996. The intent was “to make the service ubiquitous. It didn’t work,” Youngblood writes. Why? The answer is simple: competition. For the rest of the story, be sure to read the entire column.

In each weekly issue of Linn’s, either E. Rawolik VI or E. Rawolik VII dissects the contents of a stamp mixture offered to collectors. E. Rawolik is a pseudonym that is also the word “kiloware” (a stamp mixture) spelled backward. This week, E. Rawolik VI explores a sample of 120 stamps selected at random from a packet of 600 worldwide issues. A total of four stamps were faulty, leaving 116 for the review. The earliest and most recent stamps were an 1863 definitive from Costa Rica and a 1999 commemorative from France. Close to 50 percent of the stamps in the sample were valued at the Scott catalog minimum of 25¢. Nonetheless Rawolik notes that “many of the stamps were not ones frequently encountered in mixtures despite their low cost.” Rawolik also makes several interesting comparisons between this mixture and a similar packet from the same seller that was reviewed in the May 14, 2018, issue of Linn’s. Enjoy the full review in this issue.