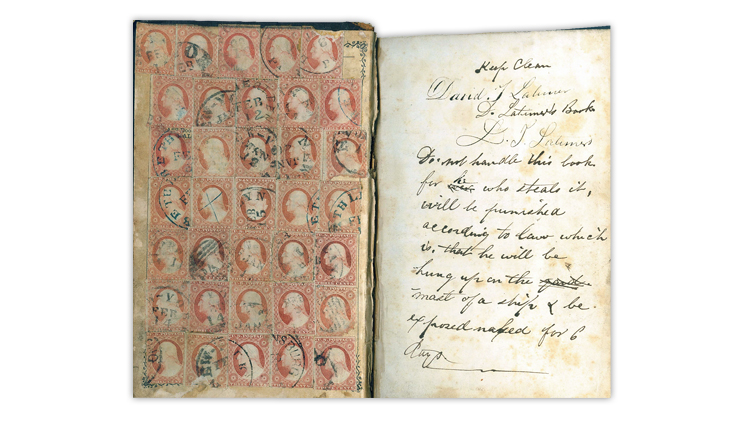 The United States 3¢ George Washington stamps plastered to the inside front cover of this textbook aren’t much to look at, but they represent an important milestone in the early development of stamp collecting. Ken Lawrence has the fascinating story of Am

The Feb. 17 monthly issue of Linn’s Stamp News just landed on the presses and goes in the mail to subscribers Monday, Jan. 27. And if you subscribe to Linn’s digital edition, you’re at the head of the line with early access Saturday, Feb. 1. Here we heighten your philatelic anticipation with three glimpses of exclusive content available only to subscribers.

The American schoolboy who collected stamps in 1856

Sometime in 1856, David T. Latimer, a young lad at a Pennsylvania boarding school, began pasting United States 1851 3¢ George Washington stamps onto the inside front cover of his German grammar textbook. For more than a decade, Ken Lawrence and his wife Ellen Peachey have studied the life and times of that intrepid stamp collector. Their research reveals that Latimer built what is believed to be America’s oldest surviving stamp collection. Read all about their odyssey in Lawrence’s Spotlight on Philately column.

Samuel Morse revolutionized communication when he received a patent for the telegraph in 1847. Numerous telegraph companies sprung up, and intense competition followed. The Western Union Telegraph Co. eventually rose to the top and expanded by acquiring other telegraph firms. In Classic U.S. Postal History, Labron Harris examines the decorative address banners printed on telegraph envelopes to show how the consolidation of Western Union evolved.

If you’re an avid topical collector, Swiss Stamp Scene columnist Richard T. Hall recommends diving into Switzerland’s picture postal cards. “These postal cards are issued by the Swiss postal service and bear a value indicium (imprinted stamp) along with a picture of a Swiss scene,” Hall explains. Among the subjects featured on these attractive items of postal stationery are kittens, polar bears, horses, golf and rare stamps in the collection of the Swiss Postal Museum in Bern.