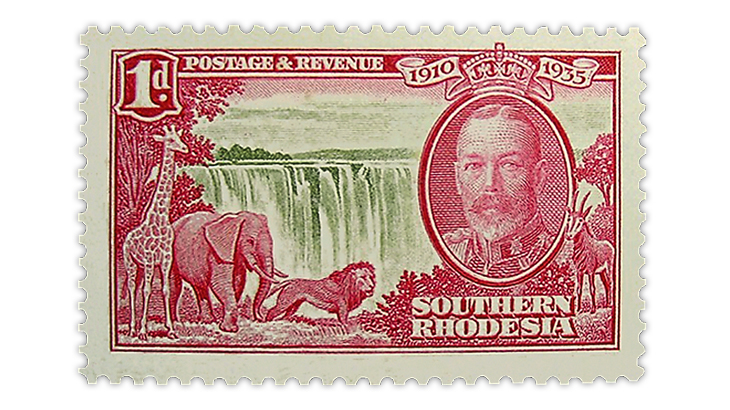 Lawrence F. Skalak III, in the cover feature in the Oct. 21 issue of Linn’s Stamp News, celebrates the color and pageantry of the common design stamps issued in 1935 to celebrate the silver jubilee of King George V.

The Oct. 21 monthly issue of Linn’s Stamp News just landed on the presses and goes in the mail to subscribers Monday, Oct. 7. And if you subscribe to Linn’s digital edition, you’re at the head of the line with early access Saturday, Oct. 5. Here are three brief glimpses of exclusive content available only to subscribers.

When the British Commonwealth celebrated the king’s silver jubilee

On May 10, 1935, King George V achieved a significant milestone: 25 years as emperor and king of the British Commonwealth. To celebrate the occasion, “the British Colonial Office proposed an imperial commemorative stamp issue,” writes Lawrence F. Skalak III in his cover feature. Although the king, a keen stamp collector, didn’t much care for commemoratives, he gave assent to the issue. In his entertaining review, Skalak highlights some of the omnibus (shared design) stamps that were issued for 44 British colonies.

Richard T. Hall, in Swiss Stamp Scene, draws upon an internationally known gold medal exhibit to introduce readers to Switzerland’s 1913 Flugspende, or flight donation, stamps that were used on mail to raise funds that were used to form a Swiss air force. Among the key figures in the Flugspende campaign was pioneer aviator Oskar Bider, who piloted most of the Flugspende flights. Aviation and airmail enthusiasts will find Hall’s column most illuminating.

In the mid-19 century, some forwarded covers in the United States were charged postage due, while others were not. In Classic U.S. Postal History, Labron Harris illustrates the various postal markings on two covers to explain why this occurred. On one of the covers, the word “missent” has a specific meaning that allowed the cover to be forwarded free of charge. Read the whole column to understand why.