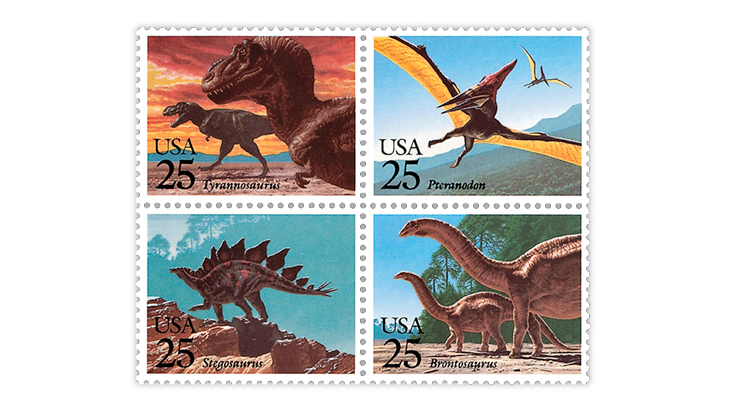 Among the highlights in the Aug. 26 issue of Linn’s Stamp News is Joe Brockert’s Philatelic Back Story column that recalls a special period during his tenure with the United States Postal Service: the development and production of the 1989 25¢ Prehistoric

The Aug. 26 issue of Linn’s Stamp News just landed on the presses and goes in the mail to subscribers Monday, Aug. 12. And if you subscribe to Linn’s digital edition, you’re at the head of the line with early access Saturday, Aug. 10. Here are three teasers to whet your philatelic appetite.

Ongoing fascination with dinosaurs on stamps

In this riveting installment of Philatelic Back Story, Joe Brockert, a former art director for the United States Postal Service, pulls the curtain back on the events that led to the issuance of the four 25¢ Prehistoric Animals stamps in 1989. One of the four stamps provided a bit of controversy at the time. Read the whole piece to find out which one created a stir.

Rick Miller, in this month’s edition of Stamps of Eastern Europe, assembles what he calls “a family album” of colorful stamps portraying Greek royalty. Along the way, Miller explains how marital and political connections with other countries influenced the Greek monarchy and its position on the world’s stage. If you’re a fan of history, you’re in for an engaging read.

In each weekly issue of Linn’s, either E. Rawolik VI or E. Rawolik VII dissects the contents of a stamp mixture offered to collectors. E. Rawolik is a pseudonym that is also the word “kiloware” (a stamp mixture) spelled backward. This week, E. Rawolik VII explores a worldwide assortment brimming with topical stamps related to aircraft, birds, flowers and more. Enjoy the full review in this issue.