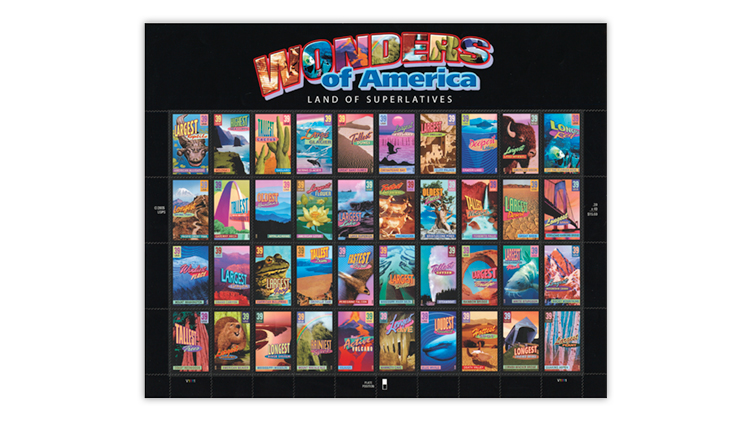 In Computers and Stamps in the July 4 issue of Linn’s Stamp News, William F. Sharpe introduces readers to online resources that can be used acquire philatelic material keyed to a specific state, along with useful tips for creating state-specific album pag

The July 4 issue of Linn’s Stamp News just landed on the presses and goes in the mail to subscribers Monday, June 20. And if you subscribe to Linn’s digital edition, you’re at the head of the line with early access Saturday, June 18. While you wait for your issue to arrive in your mailbox, enjoy these three quick glimpses of exclusive content available only to subscribers.

“Collectors in the United States may want to consider grouping stamps by state, perhaps the state they were born in or the one they reside in now,” writes William F. Sharpe in his Computers and Stamps column. He includes a helpful list of U.S. stamps with state information, beginning with the 50 13¢ State Flags stamps (Scott 1633-1682) issued in 1976. He then offers some suggestions for beginning a collection. For example, if you reside in Virginia, you might consider collecting every U.S. stamp picturing George Washington. Sharpe also gives pointers on how to create or download album pages devoted to a particular state. A good place to start is the American Philatelic Society, which offers free downloadable sets of album pages for 28 states. Membership in the APS is not required to download these pages. More tips await, so be sure to read the entire column.

In his Dollar-Sign Stamps column, Charles Snee celebrates the virtues of oversize and heavy covers franked with United States dollar-denominated stamps. As Snee explains, “A good deal of the surviving postal history [bearing dollar-sign stamps] comes in the form of package wrappers, large envelopes and other unwieldy items that can be more of a challenge to store in a collection or exhibit. But that doesn’t mean these bigger pieces aren’t fun to collect.” To make his point, Snee illustrates two items that were mailed to him in 2018: a large envelope used to mail a publication weighing almost 2 pounds and a Priority Mail medium flat-rate box that contained a book from a bookseller in New York. Snee points out “a subtle bonus” on the large envelope that went undetected until after he had opened it. Read the column to learn what caught his attention.

In each weekly issue of Linn’s, either E. Rawolik VI or E. Rawolik VII dissects the contents of a stamp mixture offered to collectors. E. Rawolik is a pseudonym that is also the word “kiloware” (a stamp mixture) spelled backward. This week, E. Rawolik VII has good things to say about an inexpensive worldwide mixture from a Linn’s advertiser in Wisconsin. Rawolik received 101 stamps and provides a detailed review of 51 of them. A total of 21 countries were represented. “France had the most stamps with nine, followed by Germany and Indonesia with seven each,” according to Rawolik. Enjoy the full review in the July 4 issue.