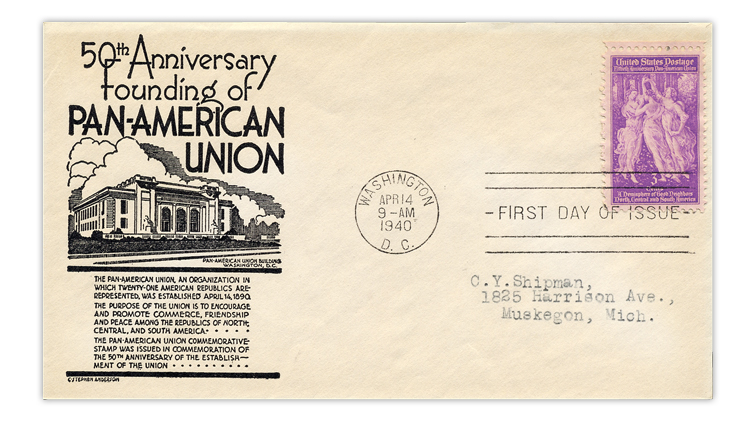 C. Stephen Anderson produced the cachet on this first-day cover for the 1940 3¢ Pan American Union stamp. Lloyd de Vries, in his First-Day Covers column in the Nov. 4 issue of Linn’s Stamp News, explains how Anderson and other cachetmakers produced collec

The Nov. 4 issue of Linn’s Stamp News just landed on the presses and goes in the mail to subscribers Monday, Oct. 21. And if you subscribe to Linn’s digital edition, you’re at the head of the line with early access Saturday, Oct. 19. Here are three capsule summaries of exclusive content available only to subscribers.

In First-Day Covers, Lloyd de Vries demonstrates how one can expand a first-day cover collection by focusing on collectible varieties produced by various cachetmakers. As de Vries explains, variations are common for handmade cachets: “The artist decides to change or move elements of the design, or even mix a new batch of paint that does not quite match the earlier color.” Printed cachets, in contrast, show less variation, but collectible types can be found. Along the way, de Vries cites several references that have attempted to catalog cachet varieties.

Charles Snee, in Dollar-Sign Stamps, takes a closer look at the United States $1 Second Bureau stamp picturing Civil War naval officer David G. Farragut. Of the slightly more than 500,000 $1 Farragut stamps printed, a block of six stands as the largest known unused multiple, while a block of eight is the largest known used multiple off cover. Postal history of the $1 Farragut can be quite a challenge, and the 1904 registered cover Snee illustrates is a real eye-catcher. In addition to a $1 Farragut, the cover is franked with 11 other Second Bureau stamps.

In each weekly issue of Linn’s, either E. Rawolik VI or E. Rawolik VII dissects the contents of a stamp mixture offered to collectors. E. Rawolik is a pseudonym that is also the word “kiloware” (a stamp mixture) spelled backward. This week, E. Rawolik VII dives into another packet of stamps from a seller in Pennsylvania who proudly proclaims in his ad that he “just turned 80.” Although just three countries — Bermuda, Finland and Norway — were represented, Rawolik found the mixture “worthwhile.”