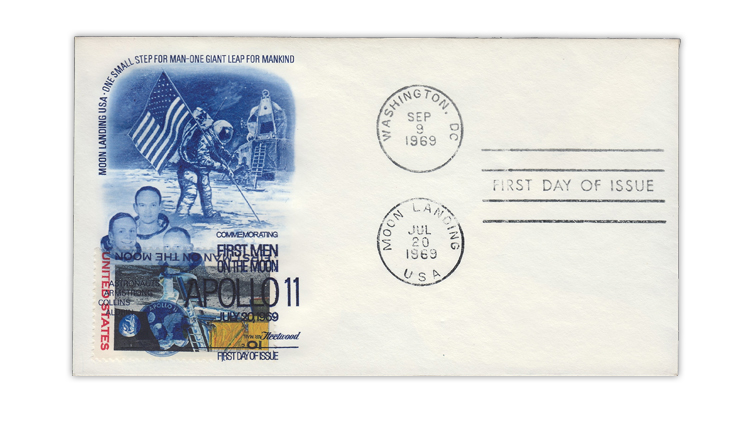 In The Odd Lot in the Jan. 11 issue of Linn’s Stamp News, Wayne L. Youngblood unravels the mystery behind the bizarre placement of the stamp on this U.S. 1969 10¢ Moon Landing first-day cover.

The Jan. 11 issue of Linn’s Stamp News just landed on the presses and goes in the mail to subscribers Monday, Dec. 28. And if you subscribe to Linn’s digital edition, you’re at the head of the line with early access Saturday, Dec. 26. While you wait for your issue to arrive in your mailbox, enjoy these three capsule summaries of exclusive content available only to subscribers.

Deconstructing a strange invert on a 1969 Moon Landing FDC

The United States 10¢ Moon Landing first-day cover illustrated here. The stamp is affixed in the wrong place, and the decorative Fleetwood cachet is applied over the stamp. How might this have happened? Wayne L. Youngblood, in The Odd Lot, answers this question by tracing a series of events that ultimately produced this freak FDC. As he explains, the problem likely originated with the U.S. Post Office Department and the fact that there was no grace period for requesting first-day cancels for the Moon Landing issue. And Youngblood reveals a key aspect of the cover that is not visible from the front: “In relation to the envelope’s flap position, the stamp was applied right side up in the upper right corner of the envelope. The envelope was then somehow inverted before it was run through the canceling machine.” For more background information, Youngblood enlists the help of Foster Miller, a seasoned FDC collector and specialist. Miller provides additional important details about the Fleetwood cachet that provide a plausible explanation for the creation of this bizarre Moon Landing FDC. Be sure to read the entire column for the complete story.

“On May 15, 1957, United States customs and delivery fees changed to 33¢ for small packets and parcel post, and to only a 13¢ customs fee for letters and letter packets,” writes Tony Wawrukiewicz in Modern U.S. Mail. After diligent searching, Wawrukiewicz reports that he has been able to locate only one cover documenting payment of the 13¢ customs fee. This cover, a 1960 letter packet mailed from Brazil to a small town in Illinois, is illustrated in the column. The scarcity of such items is due to a change in U.S. postal regulations that went into effect May 15, 1957. This change resulted in “the customs clearance fee being collected only when customs duty was collected. This was true for letters, letter packages, small packets and parcel post.” Wawrukiewicz presents additional details about the cover that will aid your understanding of the changed regulations. Perhaps you have a similar item in your collection.

In each weekly issue of Linn’s, either E. Rawolik VI or E. Rawolik VII dissects the contents of a stamp mixture offered to collectors. E. Rawolik is a pseudonym that is also the word “kiloware” (a stamp mixture) spelled backward. This week, E. Rawolik VI digs into an assortment of stamps from a seller in Illinois. Rawolik last reviewed a mix from this seller in the Dec. 24, 2018, issue of Linn’s. The current mix cost and $20 but delivered an impressive $216.40 in Scott catalog value. The total value would have been almost $60 higher had not one of the stamp been damaged (broken in two pieces) when Rawolik received it. The years of issue for the 57 reviewed stamps ranged from 1878 to 2014. “The earliest stamp was a mint example of Guatemala’s 1878 1-peso Indian Woman (Scott 14). Two definitives from Kenya’s 2014 Birds issue were the newest stamps,” Rawolik writes. Rawolik was most pleased to find 11 stamps with catalog values of $5 or more. The highest catalog value was recorded for a 1941 issue from New Caledonia. You’ll have to read the column to discover that value and other useful details about the mix.