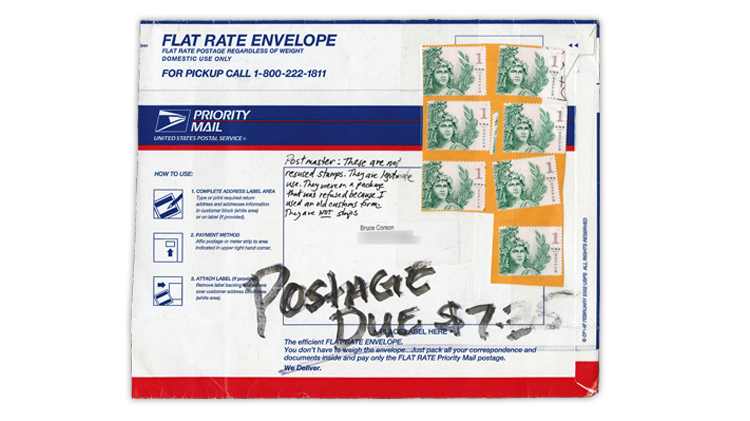 In Dollar-Sign Stamps in the March 2 issue of Linn’s Stamp News, Charles Snee highlights a Priority Mail cover mailed in 2019 that shows a rather unusual and disallowed reuse of seven $1 Statue of Freedom stamps clipped from another mailing.

The March 2 issue of Linn’s Stamp News just landed on the presses and goes in the mail to subscribers Monday, Feb. 17. And if you subscribe to Linn’s digital edition, you’re at the head of the line with early access Saturday, Feb. 15. While you wait for your issue to arrive, enjoy these three capsule reviews of exclusive content available only to subscribers.

Back in August 2019, Dollar-Sign Stamps columnist Charles Snee received a Priority Mail cover from a collector in California that was franked with seven uncanceled United States $1 Statue of Freedom stamps that had been clipped from another envelope. The sender attempted to justify the reuse of the $7 in postage with a forceful explanation written on the Priority Mail envelope. As Snee explains (and the cover shows), the plea was not successful.

Aficionados of precanceled stamps will find much to like in William F. Sharpe’s Computers and Stamps column. Sharpe orients readers with a simple definition: “A precanceled stamp is a postage stamp that has been canceled before being affixed to mail.” He then provides a useful introduction to the Precancel Stamp Society and its very informative website. Additional tips and websites for collecting precanceled stamps also are provided. Read the entire column to learn more about this fascinating collecting area.

In each weekly issue of Linn’s, either E. Rawolik VI or E. Rawolik VII dissects the contents of a stamp mixture offered to collectors. E. Rawolik is a pseudonym that is also the word “kiloware” (a stamp mixture) spelled backward. This week, E. Rawolik VII sifts through a sample of 58 stamps from 38 stamp-issuing entities that offered good value and a diverse array of topical stamps, including three picturing women.