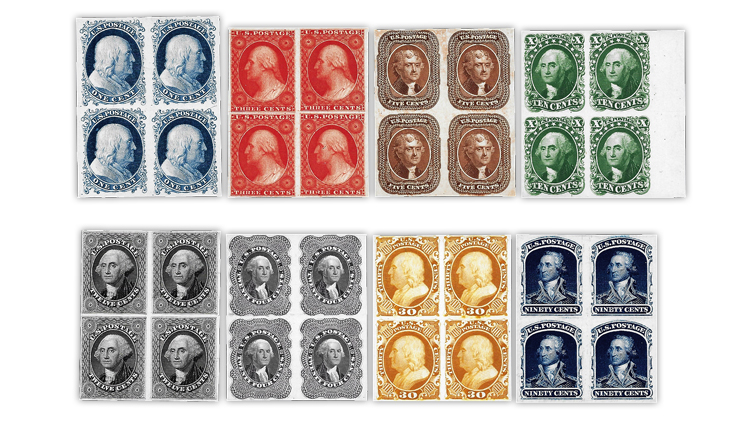 In Essays and Proofs in the March 23 issue of Linn’s Stamp News, James E. Lee provides insights regarding the reprints of the United States 1857-60 issue. This set of cardboard proof blocks of four of the 1857-60 reprints came from intact sheets of 100.

The March 23 issue of Linn’s Stamp News just landed on the presses and goes in the mail to subscribers Monday, March 9. And if you subscribe to Linn’s digital edition, you’re at the head of the line with early access Saturday, March 7. While you wait for your issue to arrive, enjoy these three capsule reviews of exclusive content available only to subscribers.

Researching the reprints of the United States 1857-60 issue

James E. Lee, in Essays and Proofs, encourages collectors to explore the 1857-60 reprints, which provide ample opportunity for research. “There have been few attempts at in-depth study of the three high denominations of this issue,” Lee writes, “because of the short period of use, lack of substantial preproduction material, and the relative high cost of used examples of the stamps.” Are you up to the challenge?

Celebrating the founder of Therome Cachets

Tom Peluso, who created the Therome Cachets line of first-day covers, died Feb. 10. In First-Day Covers, Lloyd de Vries pays tribute to this prolific cachetmaker who created covers for every new United States issue. Early retirement at age 49 afforded Peluso the time to produce his distinctive covers. He was his own toughest critic and drew inspiration from iconic cachetmakers such as Dorothy Knapp, Franz Fluegel and Ken Boll. Be sure to read the entire column. You won’t be disappointed.

In each weekly issue of Linn’s, either E. Rawolik VI or E. Rawolik VII dissects the contents of a stamp mixture offered to collectors. E. Rawolik is a pseudonym that is also the word “kiloware” (a stamp mixture) spelled backward. This week, E. Rawolik VII dives into a 1-ounce assortment of foreign off-paper stamps. Based on the reviewed sample of 55 stamps, Rawolik found attractive stamps that “were large, clean and without heavy cancellation.” A beginning collector would find this mixture most worthwhile.