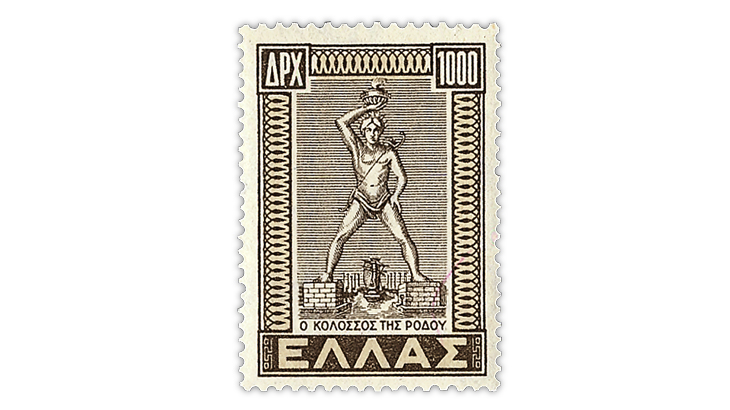 In Stamps of Eastern Europe in the Dec. 28 issue of Linn’s Stamp News, Rick Miller takes a closer look at some of the Italian stamps issued for the Greek island of Rhodes.

The Dec. 28 issue of Linn’s Stamp News just landed on the presses and goes in the mail to subscribers Monday, Dec. 14. And if you subscribe to Linn’s digital edition, you’re at the head of the line with early access Saturday, Dec. 12. While you wait for your issue to arrive in your mailbox, enjoy these three capsule summaries of exclusive content available only to subscribers.

Italian stamps issued for Rhodes, a Greek Island near Turkey

Rick Miller, in Stamps of Eastern Europe, showcases Italian stamps issued for the Greek island of Rhodes to tell the fascinating history of Rhodes, which lies about 8 miles off the coast of Turkey. One of the stamps pictures the Colossus of Rhodes. Miller provides an illuminating summary of this statue that no longer exists: “After successfully resisting a siege by the Macedonians in 304 B.C., Rhodians built the Colossus of Rhodes to mark their victory. One of the seven wonders of the ancient world, the colossal bronze statue of the sun god Helios was erected 294-282 B.C. and stood in the harbor of Rhodes until it was destroyed by an earthquake in 226 B.C. According to ancient accounts, the statue was about two-thirds of the height of the Statue of Liberty. No trace of it remains today.” Some of the other noteworthy subjects featured on the stamps pictured in the column include a Rhodian coin, a Genoese galley (ship) and the Knights of Rhodes. This is a philatelic history lesson you won’t want to miss.

In a feature article in this week’s issue, Ronald Blanks tells the fascinating story of a postcard mailed in 1907 that carried a Christmas greeting inside a diminutive envelope that was affixed to the postcard. Blanks observes of the person who sent the greeting: “Of interest is the phrase ‘This Side for the Address Only’ printed at lower left by the postcard maker. The sender Elsa, in following this rule, spent a lot of time and trouble to skirt another rule by writing a note, sticking it in the tiny envelope, and then gluing it down on the picture side. All to save 50 percent versus mailing the card in an envelope for 2¢ postage.” However, Blanks’ research turned up what he calls a “curious clause” in the 1907 supplement to the 1902 Postal Laws and Regulations that appears to allow the affixed greeting on the card that Elsa sent. Read the entire column to learn how Blanks interprets the supplement in a favorable light.

In each weekly issue of Linn’s, either E. Rawolik VI or E. Rawolik VII dissects the contents of a stamp mixture offered to collectors. E. Rawolik is a pseudonym that is also the word “kiloware” (a stamp mixture) spelled backward. This week, E. Rawolik VI digs into a one-fourth sample from a mixture of 200+ worldwide stamps described in the advertisement in Linn’s as “pulled from collections, auction lots, stockbooks, some in complete sets.” Rawolik writes that the “dates of issue of the sample stamps ranged from 1919 to 2002, with the most popular time period being the 1950s to the 1960s.” Russia came in with the earliest issue, a 5-kopeck Army of the North stamp issued in 1919. A Hong Kong 2002 $3 definitive stamp featuring sailboats and a dragon boat was the most recent issue in the reviewed sample. Read the column for additional highlights such as the cost-to-value ratio and to learn which country had the stamp with the highest Scott catalog value of $4.75.