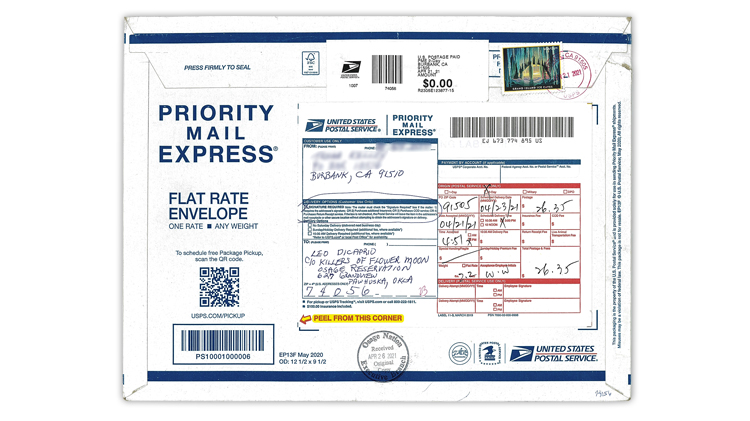 A Priority Mail Express cover addressed to actor Leonardo DiCaprio caught the attention of a collector in Oklahoma. Charles Snee recounts the details in his Dollar-Sign Stamps column.

The Nov. 1 issue of Linn’s Stamp News just landed on the presses and goes in the mail to subscribers Monday, Oct. 18. And if you subscribe to Linn’s digital edition, you’re at the head of the line with early access Saturday, Oct. 16. While you wait for your issue to arrive in your mailbox, enjoy these three quick glimpses of exclusive content available only to subscribers.

“Sometimes a brush with fame comes in the form of a cover addressed to a notable person,” writes Charles Snee in Dollar-Sign Stamps. James Weigant’s brush with fame came in the form of the Priority Mail Express cover addressed to notable actor Leonardo DiCaprio “while he was in Pawhuska[, Okla.,] filming the upcoming movie Killers of the Flower Moon,” Snee explains. The film is based on a 2017 nonfiction book of the same name by David Grann that chronicles the murders of members of the Osage Nation in Oklahoma during the 1920s. Weigant shares some fascinating details about the movie and his association with the Osage Nation. It’s a story you’ll not want to miss.

In Computers and Stamps, William F. Sharpe dives into the free suite of computer programs known as LibreOffice, which he last wrote about in the Oct. 7, 2013, issue of Linn’s. “To download LibreOffice, you will need a fast internet connection or a fair amount of time as these files are large,” Sharpe advises. Included in the suite are Writer, Calc, Impress, Base and Draw, which are similar to Microsoft’s Word, Excel, PowerPoint, Access and Publisher programs. Sharpe points out key features of each LibreOffice module that will aid in your efforts to keep your stamp collection organized. Be sure to keep this column handy for future reference.

Linn’s regularly publishes three games to entertain readers: Trickies, a word scramble puzzle by Joe Kennedy; a word search puzzle by D.E. Rubin; and Philatelic Lexicon, a crossword puzzle by David Saks. In this week’s issue, Rubin sends readers on the hunt for 28 named animals that appear on stamps. One of the names to search for is Knut, the Berlin Zoo’s famous polar bear. “Not all of the named animals shown on stamps are real. Many fictional animals, such as Bambi and King Kong, also have appeared on stamps,” Rubin writes. Grab your pencil for a few minutes of philatelic fun while you enjoy this week’s issue.