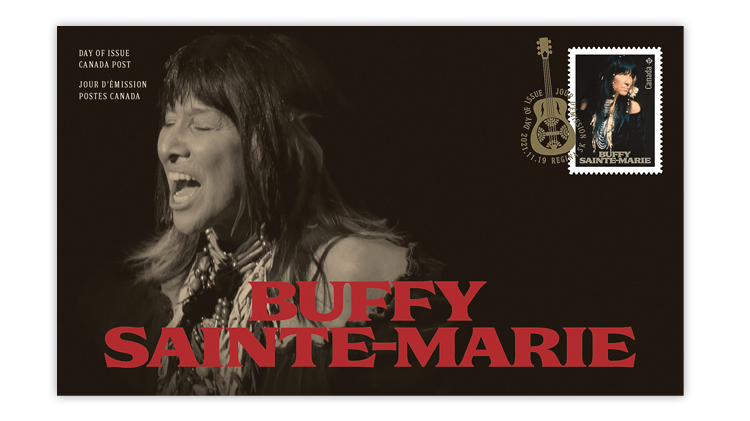 In First-Day Covers in the Dec. 27 issue of Linn’s Stamp News, Lloyd de Vries examines some broader first-day cover topics. One such topic is the place of FDCs in worldwide philately. Shown is Canada Post’s FDC for the Buffy Sainte-Marie stamp issued Nov.

The Dec. 27 issue of Linn’s Stamp News just landed on the presses and goes in the mail to subscribers Monday, Dec.13. And if you subscribe to Linn’s digital edition, you’re at the head of the line with early access Saturday, Dec. 11. While you wait for your final issue of 2021 to arrive in your mailbox, enjoy these three quick glimpses of exclusive content available only to subscribers.

FDC collecting on the world stage

“We’re between new issues in the United States now, giving us the chance to look at some broader first-day cover topics. One is the place of FDCs in worldwide philately,” writes Lloyd de Vries in First-Day Covers. He reviews the rather dim view that many philatelists had of collecting FDCs, which persisted until the end of the 20th century. Although the stature of FDC collecting has improved, some countries still make it difficult to service FDCs. Such is not the case in the United States. According to de Vries, this is because “U.S. postal regulations regarding the servicing of FDCs are much more liberal than anywhere else.” In addition, the U.S. Postal Service does not compete with dealers, FDC servicers and collectors. To make his points, de Vries looks at some of the FDC servicing requirements in Canada and Great Britain.

On Feb. 13, 1988, Saudi Arabia issued two stamps to commemorate the third Middle East regional conference of the International Road Federation. In Middle East Stamps, Ghassan Riachi provides a quick review of Saudi Arabia’s highway system and then examines the stamps in detail. “The Government Security Printing Press in Riyadh printed these multicolored stamps by lithography on unwatermarked paper. The quantity printed was small at only 800,000 sets,” Riachi explains. Collectors can acquire the stamps in a variety of conditions, and Riachi notes that they can be found on commercial covers. There is much more to learn about these eye-catching stamps, so be sure to read the entire column.

“The roots of Romania’s linguistic and religious identities lie in the ancient Kingdom of Dacia,” Rick Miller explains in Stamps of Eastern Europe. To better understand these roots, Miller takes readers on a fascinating tour of various Romanian stamps that highlight the tumultuous history of Dacia and its fierce warrior people. He leads off with a 1980 20-ban stamp featuring a Dacian warrior; the stamp is one of a set of seven showcasing Romanian warriors and soldiers from the first century to the 19th century. From the kingdom’s founding around 82 B.C. by the Thracian chief Burebista, Dacia’s history was marked by conflict and war. Characters who figure prominently in Dacia’s fortunes include Duras, a rival king; the Roman Emperor Domitian; Decebalus, a client king of Rome; the Emperor Trajan; and Patriarch Teoctist (1915-2007), the fifth patriarch of the Roman Orthodox Church. Miller tells an engaging story not to be missed.