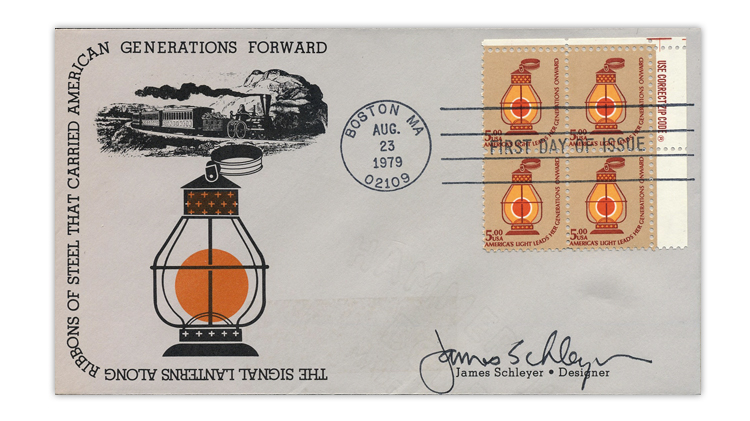 The April 26 issue of Linn’s Stamp News just landed on the presses and goes in the mail to subscribers Monday, April 12. And if you subscribe to Linn’s digital edition, you’re at the head of the line with early access Saturday, April 10. While you wait for your issue to arrive in your mailbox, enjoy these three brief summaries of exclusive content available only to subscribers.

First-Day Covers columnist Lloyd de Vries begins with a question that he often encounters in his communication with other collectors: “How much are these first-day covers worth?” As he explains, there are many other factors to consider in addition to monetary value. De Vries helpfully reminds readers that one should collect for enjoyment and pleasure. He advises that the money one spends on a collection should be seen as an “entertainment cost.” A personal anecdote helps de Vries make his point: “I know FDC collectors with pieces worth hundreds of dollars who have told me the most fun they have at stamp shows isn’t picking up a valuable cover, but sitting at the dollar booths spending hours going through inexpensive covers to find obscure usages, predates, combinations and so on.” De Vries’ other observations will help you keep the question of value in proper perspective.

“Many countries have issued stamps and provided postal services in what is now the Republic of North Macedonia,” begins Rick Miller in Stamps of Eastern Europe. Among the major players in Macedonia’s history are Bulgaria, Greece, the Great Powers (Great Britain, France, Germany, Russia and Austria-Hungary) and the Axis Powers (Germany, Italy and Japan) during World War II. Miller uses a colorful combination of stamps and postal history to show how Macedonia’s identity changed and evolved as it came under the influence of different countries and empires. His focus is on Vardar Macedonia, which is the current Republic of North Macedonia. From Alexander the Great to the demise of communism and the breakup of Yugoslavia in the Third Balkan War (1991-2001), Miller serves up a philatelic history of Macedonia you won’t want to miss.

In each weekly issue of Linn’s, either E. Rawolik VI or E. Rawolik VII dissects the contents of a stamp mixture offered to collectors. E. Rawolik is a pseudonym that is also the word “kiloware” (a stamp mixture) spelled backward. This week, E. Rawolik VII take a close look at a sample from an assortment of 546 worldwide stamps that the dealer advertised as being “the Stamp Doctor’s winter prescription to stay safe.” Rawolik found this philatelic medicine to be beneficial, noting that there were “plenty of interesting stamps” for his stamp album. One of these stamps was a 1985 issue from Peru that pays tribute to Capt. Jose Gonzales. “His plane was hit in 1941 during the war with Ecuador,” writes Rawolik. “But instead of parachuting to safety, he reportedly crashed his plane into an anti-aircraft battery.” Six of the 69 stamps in the sample were valued at $1.10 or more in the Scott catalog. The highest value went to a 2007 50-krona stamp from Sweden. Read the column to learn the stamp’s value and its subject.