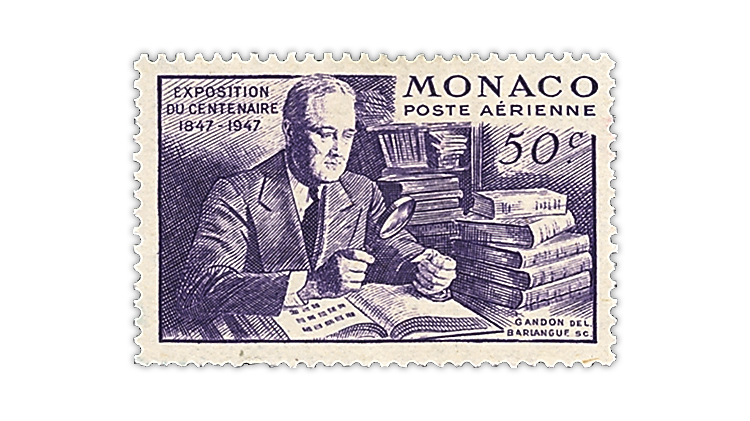 In Computers and Stamps in the May 3 issue of Linn’s Stamp News, William F. Sharpe travels the internet highways and byways to learn about noteworthy stamp collectors.

The May 3 issue of Linn’s Stamp News just landed on the presses and goes in the mail to subscribers Monday, April 19. And if you subscribe to Linn’s digital edition, you’re at the head of the line with early access Saturday, April 17. While you wait for your issue to arrive in your mailbox, enjoy these three brief glimpses of exclusive content available only to subscribers.

When it comes to philatelic fame in the United States, Franklin D. Roosevelt ranks at the top of the list among numerous collectors. But as William F. Sharpe explains in Computers and Stamps, there are many other well-known collectors whose lives make for fascinating exploration. He directs readers to the National Postal Museum’s website, which lists 40 important collectors. Once there, you can click on the pictures to discover more about each individual. Sharpe draws attention to three collectors who have been commemorated on United States stamps. One of them is Charlie Chaplin. Can you name the other two? Other helpful internet resources mentioned by Sharpe include freestampmagazine.com, stampboards.com and Stanley Gibbons’ website. Dig into the entire column to learn more about the hobby’s notable figures. There’s an amusing anecdote about Philipp von Ferrary that you won’t want to miss.

“Marine One is the official call sign used when the president of the United States is aboard the U.S. Marine Corps presidential helicopter,” writes Charles Snee in Dollar-Sign Stamps. Snee then introduces readers to the 2007 $16.25 Express Mail stamp picturing this well-known rotary wing aircraft. The stamp’s eye-catching design is based on a painting by respected aviation artist William S. Phillips. “The background on the stamp shows a landscape of Washington, D.C., and Arlington, Va. Visible are the Potomac River, Washington Monument, U.S. Capitol and National Mall. The Marine Corps Monument in Arlington can be seen in the foreground, just beneath the airborne Marine One,” Snee writes. In addition to picturing the $16.25 Marine One stamp, Snee features a registered cover franked with a single $16.25 Marine One stamp and two other issues that was sent in 2008 from Louisiana to Costa Rica. He also mentions an apparent plate flaw that was discovered eight months after stamp was issued. Read the column to learn more about it.

In each weekly issue of Linn’s, either E. Rawolik VI or E. Rawolik VII dissects the contents of a stamp mixture offered to collectors. E. Rawolik is a pseudonym that is also the word “kiloware” (a stamp mixture) spelled backward. This week, E. Rawolik VI sifts through a mixture of worldwide stamps advertised as being “unsearched.” To expedite the review, Rawolik chose a sample of 40 stamps, one-fifth of the mixture. There were stamps from 30 countries, with the earliest stamp being issued in 1875 and the most recent in 2005. Included in the sample was an issue from Manama that was not listed in the Scott catalog. Rawolik treats this stamp “as an unlisted item with no catalog value.” He also highlights stamps from Norfolk Island Rwanda. Read the column to get the details. Overall Rawolik found much to like in the reviewed sample, stating that “it had a good variety of stamps from countries throughout the world.”