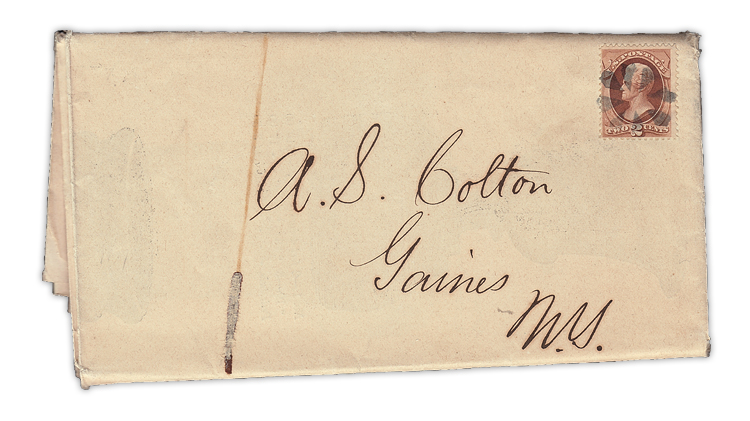 At first glance, this unassuming folded letter has little to commend it. But there is beauty within, as Wayne Youngblood explains in The Odd Lot in the Feb. 10 issue of Linn’s Stamp News.

The Feb. 10 issue of Linn’s Stamp News just landed on the presses and goes in the mail to subscribers Monday, Jan. 27. And if you subscribe to Linn’s digital edition, you’re at the head of the line with early access Saturday, Jan. 25. Here we entice you with three brief reviews of exclusive content available only to subscribers.

In The Odd Lot, Wayne Youngblood highlights a plain folded letter that he describes as “one of the more interesting items of postal history I’ve ever found in a cover lot.” Only when the letter is completely unfolded is the surprise within revealed: a very large, ornate advertising broadside for a vase manufacturer in Scotland. How large is the broadside? You’ll have to read the column to find out.

When a letter is marked “held for postage,” who should be responsible for the short-paid postage: the sender or the recipient? Tony Wawrukiewicz, in his Modern U.S. Mail column, illustrates two covers, a letter sent to Canada and a postal card sent to Germany, that should have been returned to the sender instead of the addressee. Read the whole column to understand why.

In each weekly issue of Linn’s, either E. Rawolik VI or E. Rawolik VII dissects the contents of a stamp mixture offered to collectors. E. Rawolik is a pseudonym that is also the word “kiloware” (a stamp mixture) spelled backward. This week, E. Rawolik VII finds much to like in a small worldwide assortment that cost $5, including five stamps with Scott catalog values ranging from $2 to $13.