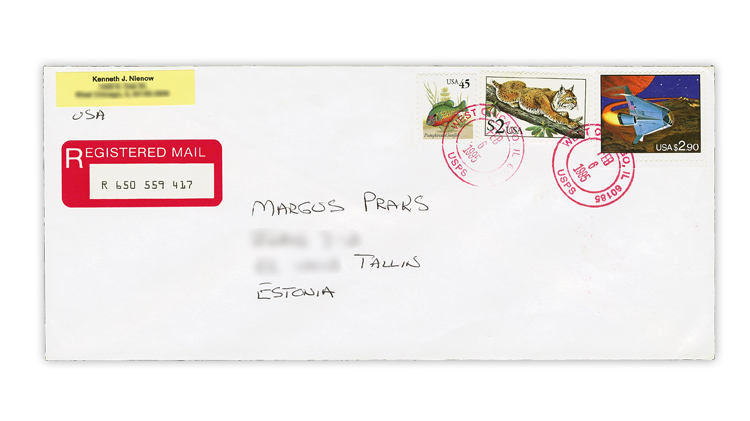 The United States Postal Service’s third Priority Mail stamp, issued in 1993, pictures a futuristic space shuttle in flight over an unidentified planet. Charles Snee highlights the stamp in Dollar-Sign Stamps in the April 4 issue of Linn’s Stamp News. A $

The April 4 issue of Linn’s Stamp News just landed on the presses and goes in the mail to subscribers Monday, March 21. And if you subscribe to Linn’s digital edition, you’re at the head of the line with early access Saturday, March 19. While you wait for your issue to arrive in your mailbox, enjoy these three quick glimpses of exclusive content available only to subscribers.

On June 3, 1993, the United States Postal Service issued its third stamp specifically for Priority Mail. The $2.90 stamp (Scott 2543) “features artist Ken Hodges’ gouache (a type of watercolor) art showing a futuristic space shuttle executing a sharp turn over an unidentified planet,” writes Charles Snee in Dollar-Sign Stamps. Snee explains that some Linn’s Stamp News readers with scientific backgrounds criticized the scene pictured on the stamp. He also shows two on-cover uses of the stamp. The first, shown here, is on a registered cover mailed in 1995 from Illinois to Tallinn, Estonia. The second is a properly paid solo use on 1993 cover from New Orleans to Boly, Hungary.

During the past 32 years, the United Nations Postal Administration has issued more than 200 stamps illustrating flags of member nations. “I have 40 of these stamps,” writes William F. Sharpe in Computers and Stamps. “I started collecting U.N. stamps by purchasing early issues at the U.N. building in New York City in 1952.” To enhance his enjoyment of these stamps, Sharpe created an album page using Microsoft Publisher. He carefully explains how he built the page and provides the exact dimensions of the page’s border, text box and stamp boxes. He also suggests other programs that can be used to create album pages, such as Affinity Publisher, LibreOffice, Scribus and AlbumEasy. And if you’re hunting online for U.N. Flag stamps, Sharpe suggests searching for “Buy UN Flag stamps.”

In each weekly issue of Linn’s, either E. Rawolik VI or E. Rawolik VII dissects the contents of a stamp mixture offered to collectors. E. Rawolik is a pseudonym that is also the word “kiloware” (a stamp mixture) spelled backward. This week, E. Rawolik VI dissects a substantive assortment of worldwide stamps issued from 1871 to 2009. The reviewed sample (one-half of the mix) is compared to a similar packet Rawolik VI reviewed in the March 7 issue of Linn’s. “Coming to an opinion regarding these two orders was like trying to determine which of your two children is your favorite. You like them both for different reasons and refrain from showing partiality,” Rawolik VI explains. Enjoy the full review in this issue.