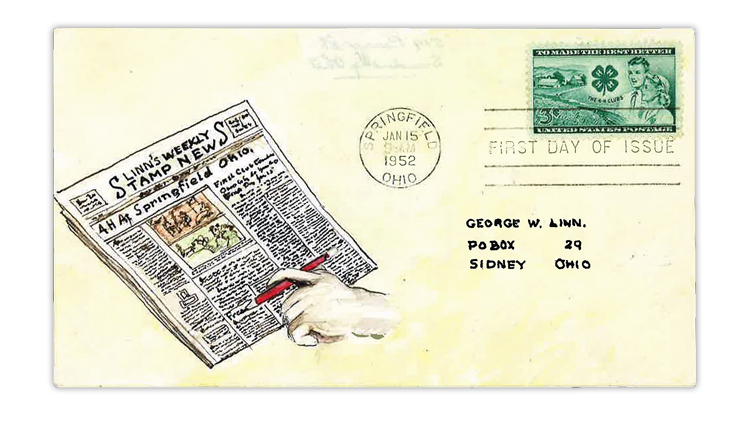 In the Sept. 30 issue of Linn’s Stamp News, First-Day Covers columnist Lloyd de Vries introduces readers to another side of George W. Linn, who, in addition to founding Linn’s Stamp News in 1928, is credited with producing the first commercial first-day c

The Sept. 30 issue of Linn’s Stamp News just landed on the presses and goes in the mail to subscribers Monday, Sept. 16. And if you subscribe to Linn’s digital edition, you’re at the head of the line with early access Saturday, Sept. 14. Here are three brief glimpses of the content while you wait for your issue to arrive.

“When North American stamp collectors think of George W. Linn, they think of the founder of Linn’s Stamp News,” writes Lloyd de Vries in First-Day Covers. Collectors of FDCs also revere Linn for another important milestone: He is regarded as the first to produce an FDC featuring a cachet, or design, that focuses attention on the subject of the stamp. Read the column to learn about the stamp Linn chose to honor and the misspelling that crept into his cachet.

Rick Miller, in Stamps of Eastern Europe, uses German and Russian stamps to explain how Koenigsberg, a Prussian city with roots dating back to the Teutonic Knights of the 13th century, was renamed Kaliningrad in 1946, in honor of Mikhail Kalinin, who Miller describes as “one of the few old Bolsheviks and Soviet politburo members slavishly devoted enough to Stalin to have survived the 1936-38 great purge and subsequent purges.”

Inside Linn’s: The fascinating backstory on Hamilton and Jackson card proofs