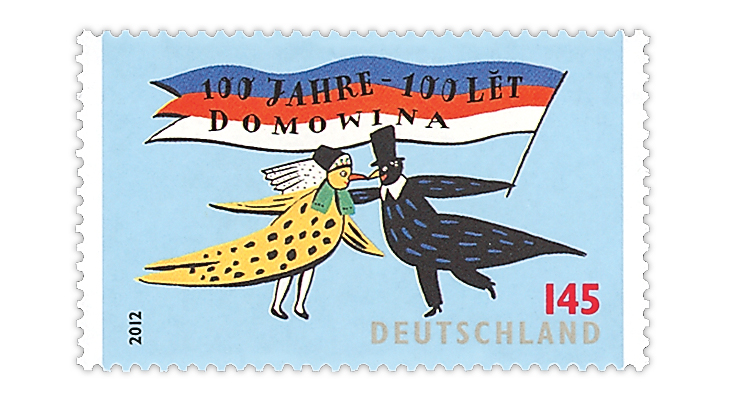 On Oct. 11, 2012, Germany issued a €1.45 stamp for the 100th anniversary of the founding of Domowina, a league representing the interests and culture of the Sorbs. Rick Miller, in Stamps of Eastern Europe, takes readers on a philatelic exploration of Sorbian culture using German stamps and postmarks.

The Aug. 22 issue of Linn’s Stamp News just landed on the presses and goes in the mail to subscribers Monday, Aug. 8. And if you subscribe to Linn’s digital edition, you’re at the head of the line with early access Saturday, Aug. 6. While you wait for your issue to arrive in your mailbox, enjoy these three quick glimpses of exclusive content available only to subscribers.

Join Stamps of Eastern Europe columnist Rick Miller as he takes readers on a philatelic tour of Sorbian culture using a splashy array of German stamps and postmarks. According to Miller, “The Sorbs are a Slavic people whose languages belong to the West Slavic group along with Polish, Czech, Slovakian and Kashubian.” Most Sorbs live in Germany today. One of the stamps Miller highlights is shown above. It was issued in 2012 on the occasion of the 100th anniversary of the founding of Domowina, a league dedicated to the interests and culture of the Sorbs. The stamp design represents the Sorbian tradition of the Ptaskowa Swajzba, or bird wedding, celebrated annually on Jan. 25.

The drive to include FDCs in international exhibiting gains momentum

In First-Day Covers, Lloyd de Vries pulls the curtain back to reveal efforts that are underway to add first-day cover exhibits at international shows. De Vries reports that Yamil Kouri, president of Boston 2026 World Stamp Expo, intends to have FDC exhibits at the nation’s next international philatelic exhibition — with or without the approval of the International Federation of Philately (FIP). But there is good news, as de Vries explains, “Reinaldo Macedo of Brazil, the [FIP] vice president for the Americas, recently formally proposed to the FIP board the inclusion of FDC exhibits at FIP shows, according to Kouri, and the president of the FIP, Bernard Beston of Australia, who is running for re-election, openly supports it.” Read the rest of the column for more upbeat news about first-day-postmarked souvenir pages and FDCs recently mailed by the American Ceremony Program Society.

Kitchen Table Philately: a valuable surprise in a worldwide mix

In each weekly issue of Linn’s, either E. Rawolik VI or E. Rawolik VII dissects the contents of a stamp mixture offered to collectors. E. Rawolik is a pseudonym that is also the word “kiloware” (a stamp mixture) spelled backward. This week, E. Rawolik VI reviews one-half of an assortment of 51 stamps from 10 countries. The stamp with the highest Scott catalog value, a used $5 King George VI definitive from Hong Kong, surprised our reviewer. There are two color varieties of this stamp, green and violet, and lilac and red. One of them is worth much more than the other. How much more? You’ll have to read the column to find out.