Inside Linn’s: Gold from Alaska by fourth-class registered mail 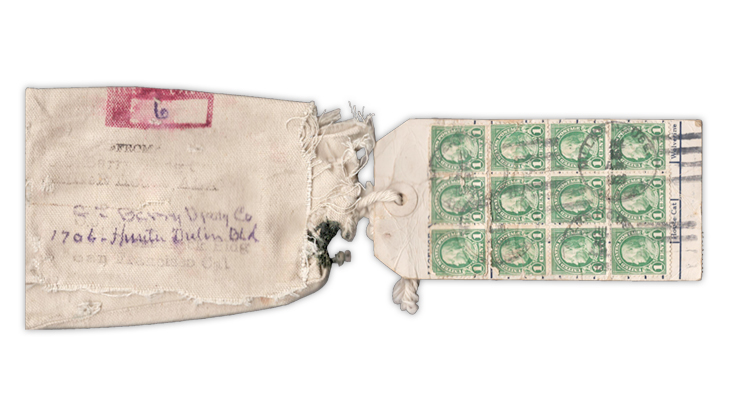 In Spotlight on Philately in the May 17 issue of Linn’s Stamp News, Ken Lawrence takes a close look at relics of gold parcels mailed from Alaska during 1914-77. This canvas pouch with its attached tag was mailed in 1929 from Miller House, Alaska, to San F

The May 17 monthly issue of Linn’s Stamp News just landed on the presses and goes in the mail to subscribers Monday, May 3. And if you subscribe to Linn’s digital edition, you’re at the head of the line with early access Saturday, May 1. While you wait for your issue to arrive in your mailbox, enjoy these three brief summaries of exclusive content available only to subscribers.

The special fourth-class registered rate for shipments of gold from Alaska was in effect for more than six decades. In Spotlight on Philately, Ken Lawrence reviews the postal and political factors that led to the rate’s genesis. Excerpts from directives issued by various postal officials provide additional context for the Alaska gold rate. Lawrence points out three distinguishing features of the rate: “It applied to just one product: gold. Other precious metals and other forms of merchandise were not included. It applied only to gold mailed to or from or within the territory (since 1959, state) of Alaska. It was a uniform rate when almost all fourth-class mail was rated by zone according to the approximate distance from origin to destination.” He also explains the differences between postal weights, which used avoirdupois ounces, and gold weights measured in troy ounces. Understanding these differences is essential when trying to interpret the frankings on the tags that were affixed to parcels of gold. Lawrence then illustrates and explains a number of what he calls “postal remnants of Alaska gold mail.” If you think you might have an Alaska gold mail item in your collection, be sure to read this column in its entirety.

Readers who follow the market for United States graded stamps will not want to miss Jim Kloetzel’s review of the results for the first quarter of 2021. The previous report, published in the Feb. 15 monthly issue of Linn’s, detailed significant changes to the portfolio of graded stamps that the Scott editors track, along with the inclusion of stamps graded gem 100 and the elimination of stamps graded very good 50. For the first quarter of this year, Kloetzel reports that 67 of the new portfolio’s stamps saw market activity. He also notes that “eight stamps have moved higher in value this quarter in the grade of gem-100 compared to the values in the February report.” In terms of value changes in general, Kloetzel observes that the “most upward movement” occurred for stamps issued in the 20th century, “with most value increases being for stamps in the extremely fine-superb 95 to gem-100 grade range.” At this point, according to Kloetzel, “graded stamps appearing in auctions and prices for graded stamps on the leading dealer price lists mirror the values shown on our portfolio charts in this report.” Read the entire report for more details and to view the accompanying portfolio charts.

In Middle East Stamps, Ghassan Riachi pays tribute to the largest series of postage stamps: the pictorial issue of 1930-36. He provides a philatelic feast for the eyes by illustrating all 24 stamps, which were issued both perforate and imperforate. Following a detailed summary of the stamps’ production characteristics and design features, Riachi provides readers with a fascinating guided tour of the sites illustrated on the stamps. Among the famous locales are Alexandretta, named for Alexander the Great; Antioch, founded by the Greek general Seleucus I Nicator; and Seidnaya, renowned for its more than 40 chapels and monasteries. “Christians and Muslims from all over come to [Seidnaya] for its healing powers, religious miracles and for the renewal of faith,” writes Riachi. There’s much more to learn about these beautiful stamps, so be sure to read the entire column.