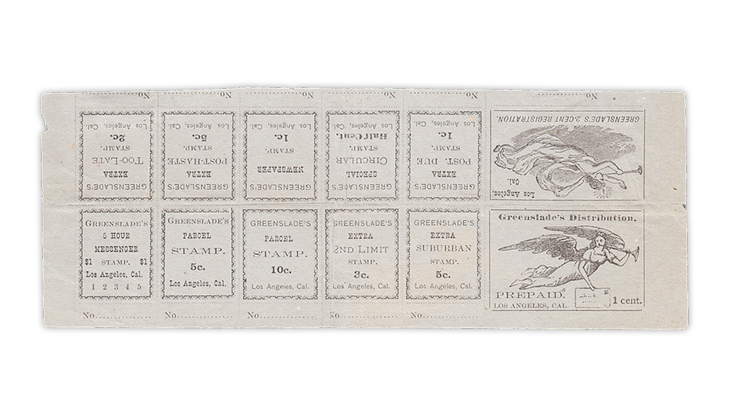 In The Odd Lot in the Sept. 14 issue of Linn’s Stamp News, Wayne Youngblood relates the sad state of affairs (mental and otherwise) in the life of Lewis Greenslade. On the plus side, in 1883 Greenslade produced an unusual set of local stamps that were int

The Sept. 14 issue of Linn’s Stamp News just landed on the presses and goes in the mail to subscribers Monday, Aug. 31. And if you subscribe to Linn’s digital edition, you’re at the head of the line with early access Saturday, Aug. 29. While you wait for your issue to arrive in your mailbox, enjoy these three brief reviews of exclusive content available only to subscribers.

Greenslade’s Distribution locals are an artifact of madness

Wayne Youngblood, in The Odd Lot, takes readers on a fascinating look at the life and times of Lewis Greenslade, a sometime stamp dealer and philatelic publisher whose rather lax ethics influenced him to pilfer stamp collections and dabble in counterfeiting. Well-known forger S. Allan Taylor counted Greenslade among his friends. On the plus side of the philatelic ledger is Greenslade’s 1883 creation of a set of local stamps that were intended to be used for various services. The whimsical stamps, which are notably scarce today, came in two designs that were printed in sheets of 12. Greenslade’s Distribution locals are known on 10 different shades of paper and two types of ungummed paper. As for Greenslade’s descent into madness, you need look no further than the bizarre inscriptions that appear on the back the sheets. He also took to calling himself the Lewis the Light and wearing an outlandish costume that included a large on his chest. Read the whole column to learn more about this notable character in our philatelic history.

Every so often, Linn’s offers succinct reviews of newly published philatelic works in New Books. In this week’s installment, Linn’s editors introduce the latest publication from the United Postal Stationery Society: the 2020 first edition of U.S. Precanceled Postal Cards, 1874-1961. The 38-page, softcover book is printed on standard 8½-inch by 11-inch pages and features color illustrations throughout. The editors write: “This work lists and illustrates all of the reported precanceled postal cards that were used in various cities and towns in 25 different states.” If you collect postal cards, this compact volume should find a place on your philatelic bookshelf. Details for ordering are provided in the column.

In the Aug. 10 Linn’s, Modern U.S. Mail columnist Tony Wawrukiewicz focused on the postal regulations dealing with shortpaid local letters. At the end of that column, Wawrukiewicz issued a “to be continued” notice of sorts, saying his next column, published in this week’s issue, would explore the handling of unpaid nonlocal mailed items. According to Wawrukiewicz, the handling of unpaid nonlocal items was governed by Ruling 394 in the August 1880 Postal Guide supplement; this ruling was in effect until Oct. 8, 1958. Specifically, the ruling asserts that any nonlocal item that arrives at its destination without prepayment of postage will be assessed “double the prepaid rates.” The correct postage was to be charged and collected upon delivery. To see how the ruling worked in practice, Wawrukiewicz illustrates and discusses two covers: a 1909 nondrop letter from New York, N.Y., to Syracuse, N.Y., and a 1936 nondrop letter from Brooklyn, N.Y., to Pontiac, Mich.

Inside Linn’s: Business reply envelopes get dressed up

Inside Linn’s: Making your own first-day cover album