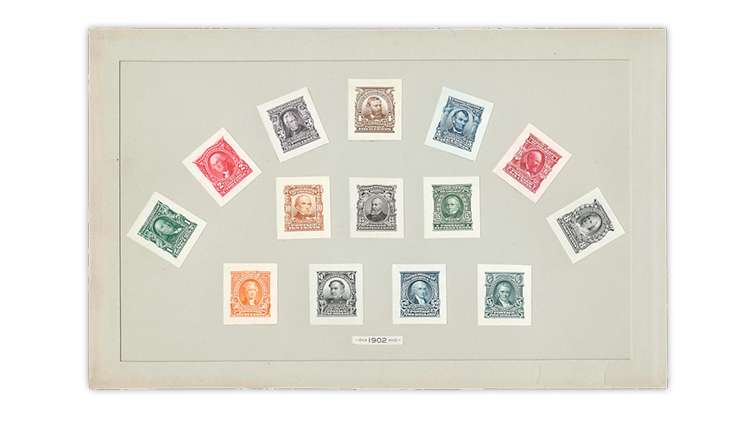 In Essays and Proofs in the Sept. 28 issue of Linn’s Stamp News, James E. Lee showcases scarce items from the impressive United States essay and proof collections of Falk Finkelburg. Shown is a Roosevelt album page featuring a set of small die proofs of t

The Sept. 28 issue of Linn’s Stamp News just landed on the presses and goes in the mail to subscribers Monday, Sept. 14. And if you subscribe to Linn’s digital edition, you’re at the head of the line with early access Saturday, Sept. 12. While you wait for your issue to arrive in your mailbox, enjoy these three brief reviews of exclusive content available only to subscribers.

Treasures from the Falk Finkelburg essay and proof collections, part 3

In the third of a projected four-part series, Essays and Proofs columnist James E. Lee highlights additional important items from the collections formed by Falk Finkelburg. Lee explains that his emphasis is “on the late 19th- and early 20th-century material that came to the market in auctions held by Robert A. Siegel Auction Galleries from March 2000 through June 2009.” To accomplish this, Lee discusses five significant items, including a photographic essay showing the Jean-Antoine Houdon bust of George Washington that Lee states “can be considered as the genesis” of the popular Washington-Franklin definitive series. Also showcased is a $1 violet black Franklin small die proof that was prepared for the 1915 Panama-Pacific Exhibition in San Francisco, Calif.

Rick Miller opens his Stamps of Eastern Europe column by noting that Vladimir Ilyich Lenin’s 1917 overthrow of the democratic government of Russia and subsequent consolidation of power could not have been achieved “without the unspeakably brutal and merciless terror of the Soviet secret police.” The founding director of the that organization, known as the Cheka, was Felix E. Dzerzhinsky. Dzerzhinsky’s unswerving loyalty to Lenin and the cause of communism led to his appearing on numerous stamps of Eastern Europe. Among the issues Miller illustrates to tell Dzerzhinsky’s story is a 1977 East German souvenir sheet commemorating the 100th anniversary of Dzerzhinsky’s birth. Despite the gruesome nature of its subject, Miller’s column provides a cautionary and useful history lesson.

In each weekly issue of Linn’s, either E. Rawolik VI or E. Rawolik VII dissects the contents of a stamp mixture offered to collectors. E. Rawolik is a pseudonym that is also the word “kiloware” (a stamp mixture) spelled backward. This week, E. Rawolik VI takes on a compact assortment of worldwide stamps. The reviewed sample yielded stamps from 26 countries. Of these the oldest issue was an 1871 25-centime Ceres from France, and the most recent was a Swedish stamp picturing a magpie that was issued in 2001. Read the entire column to find out which country served up the stamp with the highest Scott catalog value.